Blooming flowers and budding trees have given way to the smell of fresh cut grass and finding a shady spot to read a book. Summer is here!

Our oldest gal Clarice is doing well. She is currently taking two medications for some incontinence issues, which isn’t uncommon given her age. One of the medications, DES, has a very high success rate. While it hasn’t completely relieved her symptoms, there has been measured improvement while on DES. For a couple of months, she was on a roasted chicken kick as an extra morning snack. Then she decided roast was a better breakfast. After a few weeks, she went back to chicken. Recently, she has gone back to preferring beef roast.  How long roast will be the preferred meat is anyone’s guess, but we are more than happy to accommodate Clarice!  She is 18 after all.

In the spring issue, I mentioned the challenges we were having pilling our older female Kiawatha. We are pleased to report that she also loves raw beef roast.  She likes it so much that most mornings she eagerly runs to the fence for her roast! 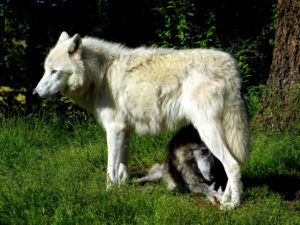 Between mowing the grass and weed-whacking, we have made some changes to the sanctuary. Guy and Anna, who were in the enclosure behind Juno and Shadow, have a new home in the back of the sanctuary with lots of seclusion! Not only does this allow Guy and Anna, who are a bit on the shy side, more privacy, but it also allows Juno and Shadow access to a second enclosure. Sometimes Shadow gets a little wary of certain types of cameras and this new arrangement allows him a buffer zone. Both pairs appear very happy with the new set-up!

Everyone was hopeful this year as we observed, via remote camera, three of the four Species Survival Plan (SSP) pairs that were recommended for breeding, actually engaged in breeding behavior. Unfortunately, due dates came and went without pups. 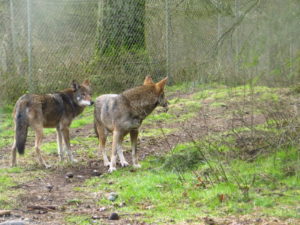 Tamaska, one of our female red wolves, looked pregnant and even spent hours in her den. Spirits were high among staff members. We were slightly concerned when Tamaska’s mate Jacob was seen entering the den, which typically the female would not allow. To get a better view of the goings-on, we borrowed a “snake” camera from a local plumber, Advanced Plumbing Technologies, and had a peek in her den. Unfortunately, only rocks were found. It remains uncertain if she was going through false pregnancy, if she miscarried, or if the pups were stillborn.

Pups or no pups, come on out for a visit and take a visit of the sanctuary. While you’re here, lose yourself meandering through our gorgeous mounded prairie.