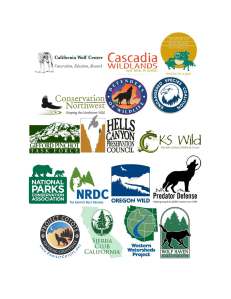 SEATTLE, Wash.— The Pacific Wolf Coalition today called on the U.S. Fish and Wildlife Service to hold multiple public hearings in the three West Coast states on the agency’s proposal to remove gray wolves (Canis lupus) from the endangered species list. Combined, the coalition represents more than 1 million members and supporters in Washington, Oregon and California. The coalition’s appeal comes in response to Fish and Wildlife Service’s announcement earlier this month that it would hold only three public hearings nationwide, including just one in the West Coast (in Sacramento, Oct. 2).

“It is unthinkable that the Obama administration is proposing to strip critical protections for gray wolves in places where wolves don’t currently exist,” said Josh Laughlin, campaign director with Cascadia Wildlands. “It is even more inconceivable that the administration wants to do this without an adequate public process. The U.S. Fish and Wildlife Service must stop and listen to people who live in states where wolves are just starting to recover after being exterminated from the landscape.”

Currently, the Fish and Wildlife Service is scheduled to host hearings only in Sacramento, Calif., Albuquerque, N.M., and Washington, D.C. Wolf recovery in the states of Washington and Oregon is in its infancy, and California had its first wolf in nearly 90 years confirmed a little more than a year ago. Wolf recovery in all three of these states would be severely stifled if federal protections are stripped. The Pacific Wolf Coalition is requesting that the agency provide West Coast residents adequate opportunity to be heard on this subject by holding additional hearings in Portland and Ashland, Ore.; Seattle, Wash.; and Los Angeles, Calif.

According to peer-reviewed research, the three West Coast states contain more than 145,000 square miles of unoccupied, prime habitat for wolves. During the past decade, wolves have been naturally dispersing into the Pacific West from populations in the northern Rockies and British Columbia. Federal protections for wolves have already been removed in the eastern third of Oregon and Washington because the area is part of the Northern Rockies “distinct population segment,” which was delisted in 2011 by Congressional action. The federal government’s current proposal would strip federal protections from the rest of those states and from all of California, removing critical safeguards for recovery of wolves across the entire region.

“Beyond their role as a living symbol of our natural landscape, the wolf is a keystone species. Wolves are critical to maintaining the structure and integrity of native ecosystems,” said Pamela Flick, California representative with Defenders of Wildlife. “Federal protections for wolves are essential to help this species recover and expand into still-suitable parts of its former range, just as the bald eagle was allowed to do before having its federal protections removed.”

“The science overwhelmingly says that for wolves to fully recover, we need more wolves in more places, and the public overwhelmingly says we need more wolves and less politics,” said Amaroq Weiss, West Coast wolf organizer at the Center for Biological Diversity. “So what does Fish and Wildlife do? It ignores the science and restricts the public’s opportunity to comment. Wolves deserve better, and so does the American public.” 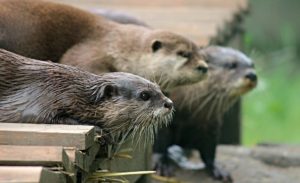 Photo of otters found on Pixabay.

As if I didn’t think that Wolf Haven isn’t already the most amazing place, here is further affirmation: This morning at about 7:30, I was getting ready to head into the sanctuary and heard my dogs barking their heads off. My lab Harley is a “recreational” barker, so I tend not to pay too much attention, but my border/aussie is the best alarm system we could ask for.

Both were keenly focused in the direction of the service road that runs from the office and residential buildings out to the prairie. As I looked in that general direction, movement caught my eye and I saw a brown/black “slinky” looking animal. Too big to be a cat and the movement was all wrong but other than stray cats, coyotes and rabbits, there aren’t a lot of terrestrial animals that size that call Wolf Haven home. Upon closer inspection, it turned out to be an otter!

Just a few feet ahead of him or her were 3 or 4 more and then a few feet ahead of them, were another group of 4-5… all just booking it down the road!!! ten otters! We are fortunate to have a very healthy wetland on the west side of property and the pond has water year round, so we think that’s where they were heading and they seemed to know where they were going so perhaps it wasn’t their first walk-about at Wolf Haven.  From a distance, Patt, Diane and I watched as they slinked away, chatting to one another the whole way. What an unbelievable way to start the day!

If you follow us regularly then you know that Bart, one of our male wolves, has been very lonely since the passing of his sister Jinkies last month.  For weeks after her passing we listened to his solo, mournful howls and our hearts ached for him but we knew that finding a new companion for him as quickly as possible would help with the healing process.

We had worked with Lockwood Animal Rescue (LARC) in the past when we rescued Bono, Eve and Klondike and we knew they were still looking to place animals so we contacted them shortly after Jinkies’ passing to see if they had a female that needed placing. Fortunately for all involved, 10 year old Samantha fit the bill perfectly. Samantha, like the other 3 rescues that LARC had helped facilitate, had originally come from the now-defunct Alaska road side attraction, Wolf Country USA . And just like Eve, Bono and Klondike, she too had spent most of her life staked out on an 8 foot drag chain so that visitists could pay $5 dollars to see wolves and wolfdogs up close.

After being rescued by LARC, Samantha (who is actually the younger sister of Eve) spent the next year and a half at their facility in southern California. And though she could have stayed, the owners of LARC felt as though she might do better in a sanctuary setting.

As it turned out, the male that Samantha was housed with at the time was moving to W.O.L.F,  a wolfdog sanctuary in La Porte, Colorado, so it made sense to do both transfers at the same time. We selected a location that was convenient for all 3 facilities (Provo, UT) as well as a date (September 4th).

Diane and I set out on Tuesday evening at 7pm, in the hopes that we would arrive in Provo the following afternoon in time to get a few hours of sleep before meeting up with the folks from LARC and WOLF, picking up Sam and then getting back on the road. 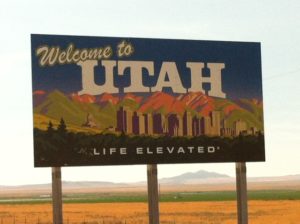 Sixteen hours and many cups of coffee later we arrived in at our designated meeting spot- the Days Inn parking lot and waited for the LARC volunteers (and Sam) to arrive. We had a few hours to kill, so we had an early dinner with the WOLF folks and then tried to get some sleep in our cargo van. Leave it to me to pick the one spot in all of Provo that had a disgruntled feral peacock who wanted the entire  neighborhood to know the extent of his ire. And just about the time the peacock let up, a landscape crew showed up with lawnmowers, weed whackers and even a chain saw! No sleep for us L

Stanley and Greg (volunteers from LARC) arrived around 8 pm and we quickly and quietly transferred Samantha into our waiting van. It was dark by that time so we were not able to get a good look at her other than to see the yellow of her eyes reflected in the parking lot lights. Unlike some of the wolves that we rescue who hunker nervously in the back of their crate, Samantha was up at the front, ears pricked forward, taking in the sights and sounds of her surroundings as we headed for home. 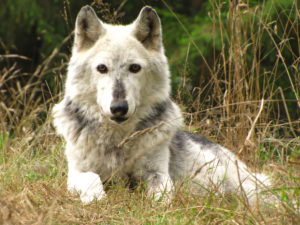 Every once in awhile I would catch a glimpse of her beautiful face as we would pass under a street light but it wasn’t until the following morning that we got our first good look at her. She was perfect. Now 10, her black has phased to that silvery-blue that is so typical of wolves but like her sister, Eve, she has a dark strip that runs down her nose. Curled in the crate, it was hard to tell how big she was, but we got the sense that she was fairly slight but with the characteristically long, thin legs and giant feet.

She was the perfect passenger and though she would lay her head down occasionally, she would not allow herself to fall into a deep sleep- for even though outwardly she seemed calm and relaxed, this was undoubtedly scary for her so she remained vigilant. 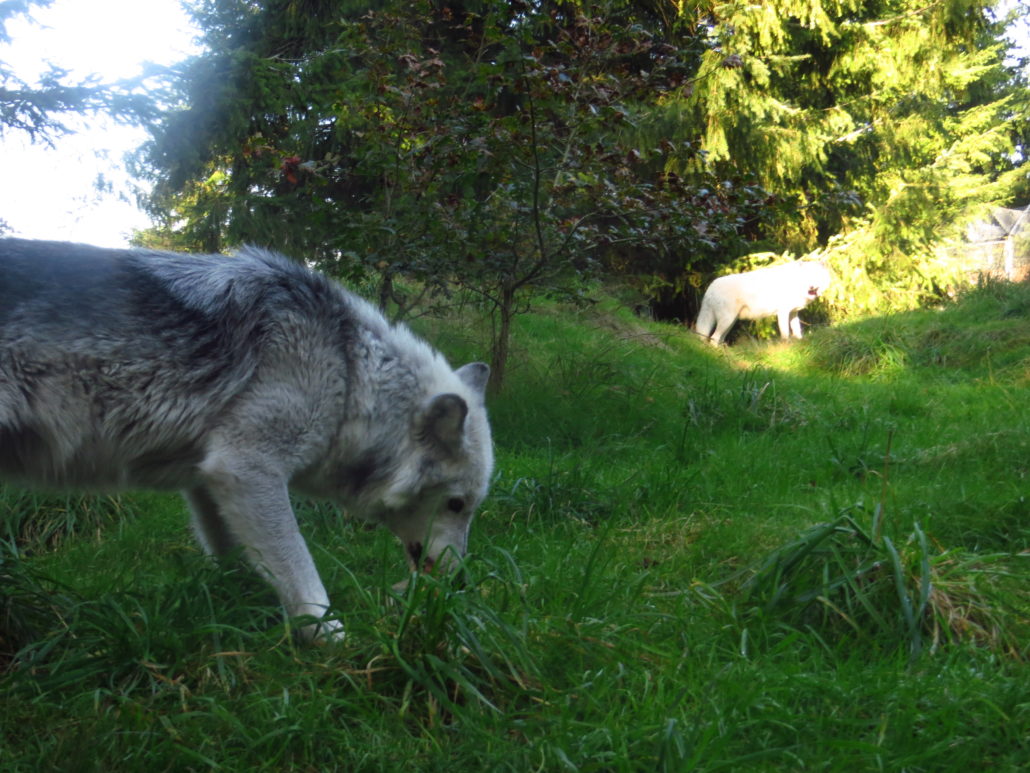 We drove straight through and arrived at Wolf Haven the following afternoon at 1. We drove directly to Bart’s enclosure and let her into the sub-enclosure (deckpen). A chain link guillotine gate separates the two but they are still able to see and sniff and even touch noses, if they so choose but it is also serves as a safety barrier in the event that the two do not get along. 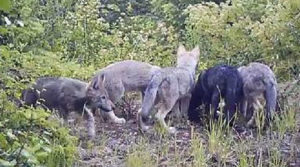 The comment period has officially been extended to 10/28! Because of the strong public response to this proposal, USFWS will hold three public hearings: DC, Sacramento and Albuquerque. Dates have yet to be determined, so stay tuned. If you live near any of these cities, please consider attending one of the hearings & speaking out for wolves.

Raise your voice for wolves!

You only have until September 11, 2013, to send your comments to the US Fish and Wildlife Service (USFWS) on their proposal to delist gray wolves in the lower US. Your comments are critical – conservation organizations throughout the US are striving to have 1 million comments sent to the USFWS to emphasize the importance of this issue for the continued recovery of wolves in the lower US.

Here are some points to consider including in your comments:

Written comments and information concerning each proposed rule can be submitted by one of the following methods to the appropriate docket numbers: