Weaving my old truck through Capitol Forest towards the small timber town of Montesano, (population 3,500) the cobalt blue sky gives way to a rolling mass of gray. Montesano, birthplace of tree farming, became the nation’s first tree farm in 1941. 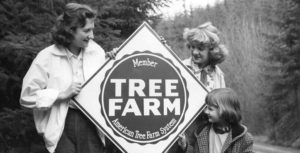 At 11 a.m. I arrive at the Montesano Library ready to share my passion and knowledge of wolves with the citizens. Once a week the Montesano Library hosts an adult lunch time program appropriately titled, Food For Thought. People pack a lunch from home and bring it to the library where they enjoy eating while listening to the speaker of the week.

Today Wolf Haven has been chosen as speaker of the wee 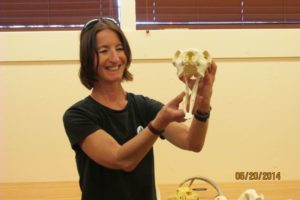 k, and I am the mouthpiece. Crunching apples, chewy cheese sandwich and sips from soda can sounds filled the room as I began the wolf talk with a long streamline hooooowwwwl. Masticating mouths froze. Breaths held still. Ears pricked up.

Once I completed the howl, I allowed for a moment of silence.Then asked everyone to imagine that they bought a “get-away” cabin for the purpose of“getting-back-to-nature”. No TV. No computer. No phone. No technological distractions.Only pure primal sounds like the wind blowing, leaves rustling, trees creaking, wild animals moving deliberately through the underbrush, and the snap-flap of a hawks wide strong wings. 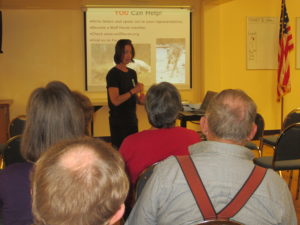 I continue. “It is dusk. You peacefully sit outside on the porch of your cabin feeling at one with the nature that surrounds you. Then one forlorn howl rises over the west hills, that solitary howl is soon joined by another and another, until there is a surround sound of howls, each varying in tone and inflection.

The next morning you go into town to the General Store to buy some supplies. You discreetly ask the cashier, ‘Are there wolves around here?’ She answers, ‘Oh yes, Lots of Wolves.’ Other folks in the store overhear and chime in, ‘This is wolf central. You are in wolf country. There are more packs here than anywhere else in the country.’ ”

Returning to Library consciousness – I ask the group – “How does this make you feel?” Greatly appreciating the candid answers, a few of the responses I get are:

“Less adventurous about exploring areas around my new cabin.” 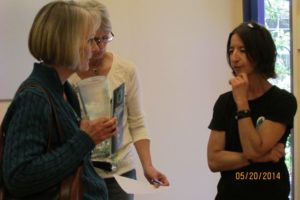 “Worried for my dogs.”

“Excited about the wolf packs around me.”

“I won’t let my children play in the woods.”

I begin the slideshow, which is primarily about wolves in Washington State, but delves into general wolf issues such as the historic and current ranges of wolves, species of wolves, wolf/livestock conflict and management. As always at these presentations there are an array of questions that range from scientific to philosophical.

Between you and me – The best part about being the teacher/speaker is how much I get to learn! 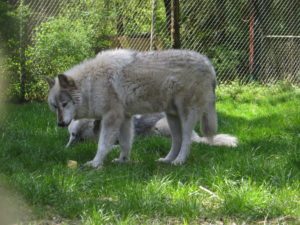 We have had some warm days already this year with more to follow, no doubt. I remember the sound of an ice cream truck during the hot summer days, sending me on a risky adventure through the couch cushions for any loose change that my parents unknowingly donated to the cause.

Summer is a good time at Wolf Haven. On hot days, it’s not uncommon to see the 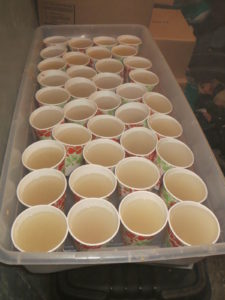 wolves lounging in the shade or to notice maybe just an ear flicker in the tall grass. They like to take it easy. We are always trying to keep their senses and minds interested with items that they don’t get on a regular basis. One such item is tuna popsicles. While we don’t have the catchy music of an ice cream truck, we’d like to think the popsicles are greeted with as much enthusiasm.

You may be thinking, “Where I can buy a tuna popsicle?” Good question, and to the best of my knowledge you can’t. We purchase disposable cups, enough for all the animals here, and we buy some tuna. We put a generous amount of tuna in the cup and fill the rest with water. We then put the cups in the freezer. Presto! Tuna popsicles.

Now we don’t limit the wolves’ culinary pallets to just tuna. We like to mix things up for the wolves. As part of our Sustainable Selections program, we sometimes get things like shrimp from the food vendor. We put the shrimp in and then add some minced garlic for extra tastiness.

Check out the VIDEO of EVE enjoying her popsicle!

Springtime is here. I know this not only because the trees are in bloom, but also because my house is covered with a thin layer of dog fur. As a matter of fact, after I typed that last sentence, I proceeded to pet my husky Winnie who was wet from the rain and my hand is now covered in a layer of fur.

If you have been to the sanctuary in the winter months you could be fooled into thinking that wolves weigh 150 pounds or more, based purely on their perceived girth. The reality is that wolves are so well insulated that their bulkiness in winter is just fur! A wolf’s coat is comprised of two different types of fur; a soft undercoat and coarser outer coat with longer guard hairs. The longest fur is on the back by the shoulders, often referred to as a “cape.” 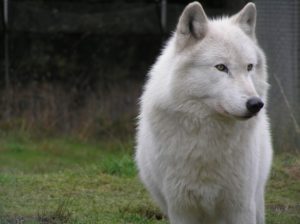 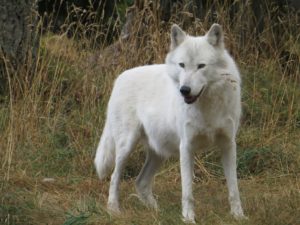 Wolves also have more fur in their ears than dogs to help protect the inner ear from the elements. When wolves are in extreme cold temperatures, say -30 degrees, their undercoat keeps them warm and you will often find them curled up in a ball with their noses tucked under their tails, like this husky.

So with their size in winter attributed to their fur, we can assume that the rest of the year they appear smaller.This true, but not for the reasons you may think. It makes sense to have more fur when it’s cold and less when it’s hot, but temperature isn’t the reason for the fur loss. Wolves, like all mammals, are photoperiodic- meaning that their endocrine cycles are regulated by the amount of daylight hours. In the spring as daylight hours increase, melatonin mediated changes cause prolactin levels to rise in both male and female wolves.

Prolactin is a hormone that triggers maternal and paternal behavior in wolves, among other species, such as denning, lactation, and shedding. The peak levels of prolactin coincide with the onset of summer and decrease throughout the rest of the year.Right now, the wolves are starting to look a little ragged, with clumps of fur hanging off of them. 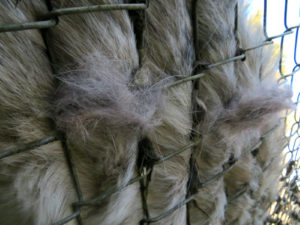 You may even see a fence line or two that looks like it’s growing some fur. If you come and visit us this summer, just don’t be surprised if the wolves look smaller than the last time you were in the winter and be thankful that the hair isn’t on your furniture!