December is usually a time of celebration as we celebrate the varied end-of-year holidays and festivities that take place. This year, however, Wolf Haven experienced a string of losses in the sanctuary that made it a very bittersweet time for us. Occasionally, as in this case, several animals pass away in a short time frame. It may seem unusual, but when you have a fairly geriatric wolf population, as we do at Wolf Haven, these deaths are not out-of-the ordinary – but this doesn’t make them any less difficult to witness. In the wild, wolves typically live 4-6 years, whereas due to the safe, secure environment and medical attention that we are able to provide at Wolf Haven, many of our residents live into their teens. The four animals that we pay tribute to here passed away at the ages of 15-1/2, 12-1/2, and nearly 17, respectively. 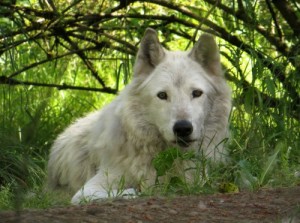 On December 11 and 12, we lost the brothers and littermates Hopa and Aki. The brothers had grown up together at a wolf facility in Washington State and were moved to Wolf Haven in 2014 after the facility decided to close its doors.

For most of their lives, the brothers lived apart. They had separate enclosures, separate female companions and separate lives. When they came to Wolf Haven, Aki and Hopa came as bachelors and each was initially paired with single females here at the sanctuary. Both ended up outliving their female companions and were once again living alone.

A few months ago, we moved Hopa into the enclosure next door to his brother Aki and though there was a fence between them, they seemed to enjoy each other’s company (we often saw them spending time at the communal fence they shared). Hopa passed away on December 11 due to suspected kidney failure, and his brother Aki died the next day from complications due to advancing age. They were 15 ½ years old. 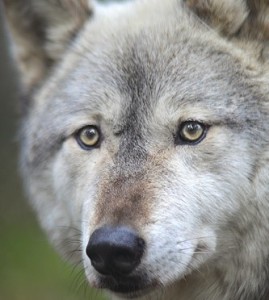 Klondike passed away from large, aggressive hemagiosarcoma (blood tumor) on December 14. He was a handsome wolfdog with a grizzled brown and gray coat, beautiful eyes, and one of the sweetest faces in the sanctuary.

Klondike spent most of his life before coming to Wolf Haven in squalor, tethered to an eight-foot drag chain at a roadside attraction in Alaska. He was finally rescued in 2011 when the site was investigated by the state and shut down. At Wolf Haven, he shared an enclosure with gray wolf Mehina for several years until her passing, and then lived with female wolf Shali. Klondike was known for his very mellow personality and could often be seen lying down and observing ravens flying overhead or wolves playing in surrounding enclosures.

Sometimes he suddenly took off at full speed and ran “laps” around his enclosure, eventually coming to a stop near the caretakers – especially if they had food.He loved to sing and rarely missed the opportunity to join in a collective howl with the others in the sanctuary.

At almost 17 years of age, Lady was the oldest female in the sanctuary and for the most part, she enjoyed excellent health. In fact, she gave her much younger companion, Caedus, a run for his money at every turn. However, last April Ladyhawk started having periodic seizures, which is not uncommon in older canids. Initially, Ladyhawk’s seizures were relatively infrequent and short in duration and she rebounded quickly.  As we moved into autumn, her seizures were still infrequent, but lasted longer and recovery was slower. 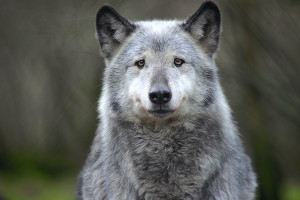 Three days before Christmas, animal care staff found Ladyhawk in her deckpen lying unresponsive and with labored breathing. Thinking that perhaps she had just had a seizure, we were hoping that she might rebound, as she had in the past. Sadly, she did not and it was apparent that she was in discomfort. After sending video footage and consulting on the phone with our attending veterinarian, it was decided that the kindest thing we could do for Lady was to help her pass on. Ladyhawk was humanely euthanized in her enclosure, surrounded by her caretakers as Caedus kept vigil from a distance. It was a very peaceful passing.

Ladyhawk was one of the most well-known wolves at the sanctuary, partly because of her beautiful, expressive face that graced many an article, story or video of the sanctuary and partly for her mischievous personality.

Although it is always very sad to lose a beloved resident of the sanctuary, we can all gather some comfort in knowing that at least while they were living at Wolf Haven, each animal was treated with care, compassion and respect.  We are honored that we had an opportunity to provide a home where each could flourish in his or her own way. We wish to give a very special thank and heartfelt condolences to those of you who honored their lives through symbolic sponsorship and adoption.

Diane Gallegos, executive director of Wolf Haven International, will speak Thursday about the state’s wolf recovery plan and how the Wolf Advisory Group is working toward a goal of co-existence with wolves in the wild. Gallegos will be speaking at the meeting of the Tahoma Audubon Society.

Exciting news in the Mexican wolf population! The Interagency Field Team (IFT) has confirmed that a pup who was cross-fostered in 2014 survived and later went on to reproduce.