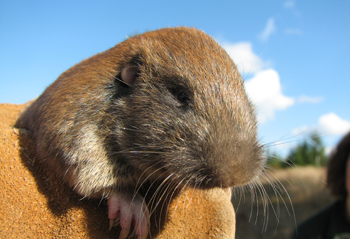 Wolf Haven International is a relocation site for the state threatened Mazama pocket gopher. Since 2006, the Washington Department of Fish and Wildlife has relocated over 332 pocket gophers to Wolf Haven’s prairie from development sites. Our prairie is surveyed three times a year to assess how this population is faring.

The pocket gopher’s diet consists of roots and bulbs, and they are known to pull entire plants into their tunnels, making the prairie an ideal habitat. Unlike the volcano-shaped mounds left by the Townsend’s mole, the Mazama pocket gopher spreads its soil out in a fan-like shape from its burrow entrance. Pocket gopher burrows have separate chambers for food storage, nests, and waste. The pocket gopher’s place in the food chain is near the bottom, providing food for snakes, hawks, owls, coyotes, foxes, bobcats, badgers, and skunks.

The Mazama pocket gopher has been a candidate for protection under the federal Endangered Species Act since 2002 but is still waiting, which puts it at risk for local extinction. Habitat loss due to development, succession, and agriculture continues to jeopardize the recovery of the pocket gopher. In the meantime, there are still moles and Mazama pocket gophers living on Wolf Haven’s prairie, continuing to aerate the rich prairie soils and to prepare open soil for native plant seed germination.