Prairies are one of the rarest ecosystems in our country. Ninety-seven percent of prairie land has been eliminated in Washington State and of the remaining three percent, less than half is currently in a protected status. Wolf Haven partners with The Center for Natural Lands Management, Washington Department of Fish and Wildlife, The Audubon Society, U.S. Fish and Wildlife Service, and Department of Army to restore the 36 acres of Mima Mound prairie found on our 82 acres back to its former condition. 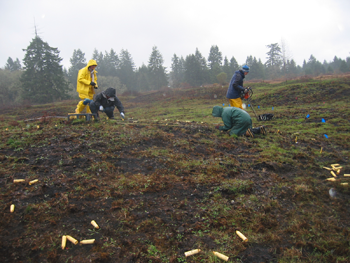 Throughout history, Native American tribes used burning techniques on prairies to encourage growth and productivity of flowering plants. Burning replenishes nutrients and ash that support growth of certain plants like the camas lily, whose root was harvested in large quantities and was a staple of the Native American diet. Without fire, woody plants reestablish themselves, and in time, shrubs and tree seedlings would become a young forest shading out native prairie plant species. Conifers like the Douglas Fir are considered an invasive species on the prairie.

Planned controlled burns are regularly conducted on portions of our prairie by our conservation partners. Tuber, seed plants and medicinal plants all germinate after a fire, which promotes the growth of native plant species, controls invasive weeds and provides minerals to the soil via dead vegetation. In the spring the native species of blooms are especially abundant on the area burned the previous summer.

The Center for Natural Lands Management regularly donates and plants plugs of native prairie plants to Wolf Haven in order to advance the continued restoration of our mounded prairie to its natural state. Volunteers spend hours annually removing non-natives such as Scotch broom, locust trees and vinca. 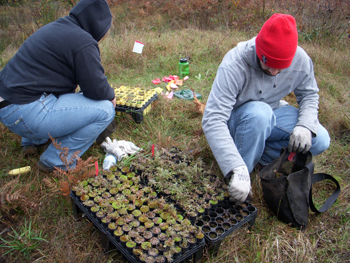 The prairie plant Golden paintbrush is listed as Endangered by the U.S. Fish and Wildlife Service. Wolf Haven’s prairie is one of six other remnant native prairies in western Washington where seedlings of this extremely rare and beautiful native plant have been planted.