What happened to the Mexican gray wolf? 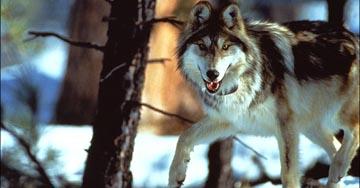 Mexican gray wolf prior to release in the wilds of the southwest. Photo courtesy of USFWS.

The Mexican gray wolf (Canis lupus baileyi) – also known as the lobo – is the most highly endangered subspecies of gray wolf. In fact, the Mexican gray wolf is one of the rarest mammals in the world. It is estimated that at least 4,000 of these wolves once roamed across Texas, New Mexico and Arizona and were equally as abundant in Mexico.
Like the other gray wolves in the United States, Mexican gray wolves were exterminated by government programs and private individuals to the point of near extinction. When the idea for wolf recovery in the Southwest began in the late 70s, officials had to face the reality that two of the indigenous species were extinct.  There were originally three separate sub-species of gray wolves that could be considered Mexican wolves – Canis lupus (C.l.) monstrabillis, C.l. mogollonensis, and C.l. baileyi.  By the time wolves were wanted to re-establish a population, only C.l. baileyi remained – and not in the U.S.

A former wolf-trapper, Roy T. McBride, was commissioned in 1977 by U.S. Fish and Wildlife Service to conduct a survey of Mexican wolves in Mexico.  What started as a survey ended as a trapping mission with the goal of starting a captive breeding program. Over a period of three years, McBride live-trapped five Mexican wolves in two regions of Mexico. Three of those wolves became founders of what came to be known as the McBride lineage of the Mexican wolf captive breeding program.  The first litter of pups from the McBride lineage was born at the Arizona-Sonoran Desert Museum in Tucson, Arizona in 1978.

There were two captive populations that were considered. One was the Mexican wolves from the Chapultepec Zoo in Mexico City. The zoo population was founded by two wolves in the mid 1970’s. The other captive population was a group of what were thought to be Mexican wolves that were privately owned.  This captive group was also founded by only two wolves.  The male was trapped near Tumacacori, Arizona in 1959 and the female was purchased by a Canadian visitist in Yecora, Sonora, Mexico in 1961.

After an extensive genetic assessment of these two captive-born groups, the decision was made to add both of them to the captive breeding program for a much needed genetic infusion.  Eight wolves were taken from the zoo in Mexico City and named the Aragon lineage.  Twenty-two wolves were added to the breeding program from the privately owned group in the United States which came to be known as the Ghost Ranch line.

By the time these two new lineages were added, there were a relatively large number of wolves representing the McBride line.  The same became true in the Southwestern wilderness when Mexican wolves were first returned to the wild in 1998.  As more representation from the Aragon and Ghost Ranch lineages has been bred into the population of captive wolves, the push has begun to also increase those lines in the wild population. 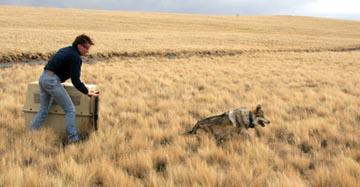 Mexican gray wolf being released into the wilds of the southwest. Photo courtesy of USFWS.

According to the, the recovery plan, initial releases can ONLY take place in the primary recovery zone (Arizona). The Gila (NM) is the secondary recovery zone – meaning that only wolves that have already lived in the wild (either through reintroduction of they were born there) can be released into the Gila. The recovery area in the Southwest (both AZ and NM) is referred to as the Mexican Wolf Experimental Population Area (MWEPA). The MWEPA consists of 6854 square miles, 5763 square miles of which is the Gila.