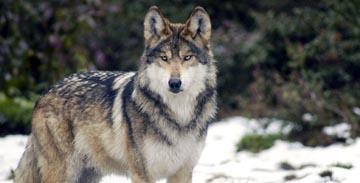 The Mexican wolf is one of the most endangered mammals in North America. After being eradicated from the United States, a recovery program was initiated in 1977 with the capture of the last five remaining wild Mexican wolves in Mexico. Because their population was so low, wildlife officials felt the only option for restoration of this wolf was captive breeding and reintroduction. Although reintroduction efforts began in 1998, currently there are only approximately 145 free ranging Mexican wolves in North America today (Arizona, New Mexico and Mexico).

A Species Survival Plan (SSP) is a cooperative effort between the U.S. Fish and Wildlife Service (USFWS) and the Association of Zoos and Aquariums (AZA), as well as non-AZA participants (like Wolf Haven). An SSP program is designed to oversee the population management of an endangered species in captivity and to enhance their conservation in the wild. In the case of the Mexican wolf SSP program, the Service maintains a genetically diverse captive population of approximately 300 wolves housed in 52 institutions both here in the U.S. and Mexico.

Wolf Haven’s role as a breeding and foster facility

Wolf Haven plays a dual role in the Mexican wolf SSP. We serve not only as a captive breeding facility (wolves are born and bred in captivity and remain in captivity) but we are also one of only three U.S. pre-release breeding facilities for the Mexican gray wolf program. This differs from other captive breeding facilities in that wolves are either born or transferred here for breeding and aversive conditioning prior to release in the wild. Two packs of Mexican gray wolves (11 animals total) from Wolf Haven have been released into Arizona’s Apache National Forest: the original Hawk’s Nest Pack in 1998, the first year of the release, and the Cienega Pack in 2000. Both groups of wolves fared extremely well in the wild, making substantial contributions to Mexican Wolf Recovery. In 2016, a family of 11 Mexican wolves who originated at Wolf Haven were released into the wild in Mexico.

Historical information about the Mexican gray wolf and recovery efforts