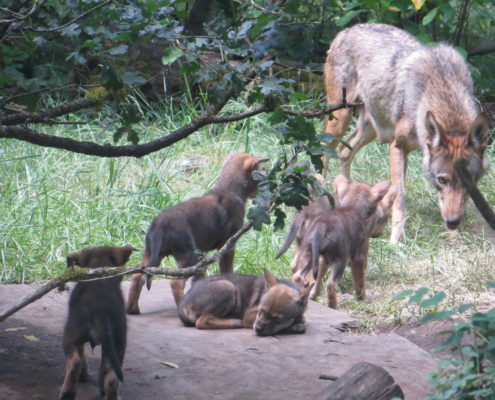 The red wolf is indigenous to the United States and not found anywhere else in the world. The U. S. Fish and Wildlife Service currently recognizes the red wolf as a unique species of wolf, smaller than the gray wolf but larger than the coyote. Due to aggressive predator control programs, habitat destruction and eastward expansion of the coyote, this was a population on the brink and in 1973, they were listed as endangered species. By 1980 the 14 remaining pure red wolves were removed from the wild. Those 14 wolves became the founding population for a captive breeding program in preparation for reintroduction into suitable areas to restore the population. In 1987 the first red wolves were released to a native habitat (Alligator River National Wildlife Refuge, North Carolina) and currently there are fewer than 35 red wolves inhabiting five northeastern counties in North Carolina.

A Species Survival Plan (SSP) is a cooperative effort between the U.S. Fish and Wildlife Service (USFWS) and the Association of Zoos and Aquariums (AZA), as well as non-AZA participants (like Wolf Haven). An SSP program is designed to oversee the population management of an endangered species in captivity and to enhance their conservation in the wild. In the case of the red wolf SSP program, the Service maintains a genetically diverse captive population of approximately 250 wolves living in captivity in 43 institutions across the U.S. The Red wolf SSP is headquartered at Point Defiance Zoo in Tacoma, Washington.

Wolf Haven became a cooperator in the Red wolf Species Survival Plan program in 2003. We serve as a captive breeding facility (wolves are born and bred in captivity and remain in captivity). Wolf Haven produced four litters of red wolf pups – in 2005, 2015, 2016 and a litter of eight in 2017. There are currently eighteen red wolves in residence at Wolf Haven.

Historical information about the red wolf and recovery efforts