Nearly exterminated in the wild during by the 1930s, the Mexican wolf remains one of the most endangered mammals in North America. In May, Wolf Haven’s Director of Animal Care Wendy Spencer assisted in the care & observation of two wolves scheduled for future release. This is Part 5 of an ongoing series of blog posts about her experience in Arizona. 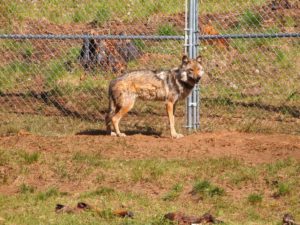 One of two Mexican wolves in pen.

The following morning I headed out in the dark and made my way to the blind. Twenty minutes would pass before I saw any movement from the wolves so perhaps they had decided to sleep in that morning. If they detected my presence, they gave no indication, as they did not even glance in my direction the entire time I was there- a marked difference from the day before. They went about their morning routine of stretching, marking, eating off a carcass and chasing ravens- pretty uneventful but amazing nonetheless. One of things I was asked to do was to try and determine whether or not the female had pups. There was some indication that the female had whelped approximately 10 days earlier but after reading the log book entries detailing her behavior and then seeing her through the scope, she did not look or behave as if she was nursing pups. She was out the remainder of the time that I was at the blind and rather than having a “bagged up” appearance that would be consistent with nursing, her abdomen appeared tucked up. 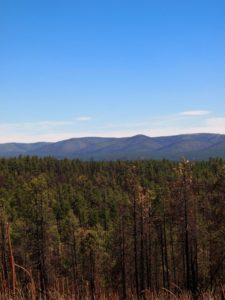 As I watched F1126, all of a sudden in the distance, a low, melodious howl broke my focus and I listened as it drifted through the basin. I could see the pair so I knew it was not coming from them and it was decidedly wolf, so it must have been M1107. The pair did not respond but rather just stood on high alert, ears pricked forward in the direction of the howls. The serenade continued and after a few seconds, I thought I heard a second voice join the chorus but there had been no reports of other wolves in the area, so I assumed it was just an echo. Listening to the howls, I was moved beyond words- It was so beautiful and pure.  After working with these animals in captivity for 15 years, to finally see and hear them on the landscape filled my heart and soul with overwhelming emotion. The howling continued off and on for the next 40 minutes and then there was silence.

When my 2 hours were up, I returned to camp and delivered the disappointing news about pups. The sun was now up and everything was awash in the color of the early morning sun. The customary spring winds had not yet kicked up so it was very silent (save for the birds). I knew elk were in the area because I had come to learn that their hooves make a very distinct sound when they hit the downed, dried aspen trees that clutter the forest floor. 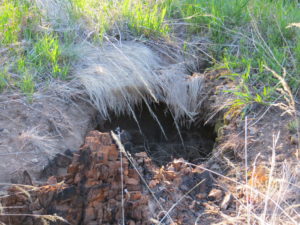 Because the sun was in my eyes, it was hard to make out the orange and pink surveyors tape that marked the trail that led to and from the blind so I ended up veering slightly off the path. As I looked around for the footpath, a muffled, rustling sound caught my attention. I looked down and suddenly realized that I was about 2 feet away from a den entrance- badger most likely given the size – and not wanting to disturb the family further, I quickly hurried away. Further down the path I came across another den site, this one larger so most likely coyote. This was a fertile hillside…….. (to be continued)

What's it like to work with wolves? circa.com
October World of Wolves - Wolf Haven book is here!
Whatcom TALK: Road Trip: Thurston County's Top 12 Attractions
December World of Wolves -Off chains and out of the kennel
Bart gets a companion!
A wolf called London - blog by Jenny Landor