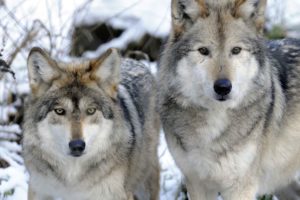 From time to time, Wolf Haven receives inspirational, heartfelt messages from young wolf advocates. In keeping with the holiday season, we want to share excerpts from two of them (both  reprinted with parental & author permission).

Flora C. is a 12-year old Seattle-based 7th grader (middle school) who wants to be zoologist. Here is a bit of a lovely piece that she wrote shortly after visiting Wolf Haven International.

“Wolves. Silent watchers. Ghostly hunters. Moon singers. Something about them catches my eye and the eyes of thousands of others. Maybe it is the mournful, haunting howl of the pack or those golden eyes and loping run that carries them mile after mile. Perhaps it is their silent watchfulness or the care with which they look after their mates and pups. Or, it just might be the fact that we have finally noticed what we have done to canis lupus, finally realised that their stories are no longer just about them living off the land. Their stories are now about survival, survival at human hands.

Human hands cause destruction, but they can also bring hope. Such are the hands of Washington’s Wolf Haven.”

Flora then went on to describe the histories of several animals that have been rescued and currently live here. She closed her report with this powerful message:

“This is for the wolves. All this writing, all these words; it is all for them. Their stories must be told or wolves too may vanish.
So, this is my wish, my hope for all wolves: 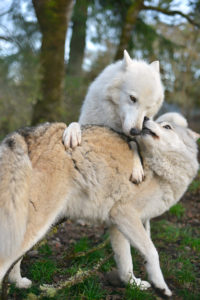 Kate K. is also a 12-year old student, but she resides in Ireland. After becoming a Wolf Haven member and receiving several issues of Wolf Tracks magazine, she wrote this letter:

“I presented the magazines as part of a project I was doing in school about wolves. The pictures in them were a big hit with the rest of the class and I also lent them to the girl I was doing my project with as she loves wolves and everything about them. She said it also helped change her father’s view on wolves as he was deathly scared of them before she showed him the magazine. He still has some fear of wolves, but me and my friend are currently working to change that.”

We often hear that youth are our hope for the future. After reading these words from two representatives, how could we ever doubt the truth of that?

Happy Holidays to everyone. Thank you Flora, Kate, and all of the young people out there who care about the future of wildlife.