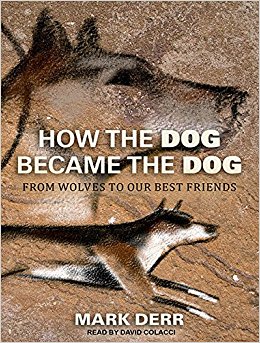 How The Dog Became The Dog: From Wolves To Our Best Friends by Mark Derr is exactly what the title says it is.  Mark gives a comprehensive and detailed description of the history of the dog and its descent from the wolf. He includes, for how could he not, the progression of the dog human relationship.  Humans have influenced dog evolution and dogs have influenced ours, at least that is a conclusion that can be drawn from the book.  Equally important in this book is the evaluation of wolf versus dog.  The confusion on how much of a wolf a dog really is is confounding to many.  Mark has determined that there is wolf, dog wolf (different from wolf dog), and dog.   He describes how the dog is so different from the wolf that there really should be no confusion.  He gives behavioral and physical descriptions that show why wolves are wolves, and dogs are dogs.
What makes this book excellent is that Mark has done his homework, literally, breaking open myths, citing primary literature, including personal anecdotes, and drawing from paleontological and genetic research. Experts have long disagreed about when the dog first appeared, some even disagree on what a dog is.  Mark has combed through each argument and presented it in a way that makes that answer, well, still just as mysterious but at least honest. There are parts of the book where having a science background is certainly handy, however, the scientific language is broken open so that anyone that wants to know how the dog became the dog can understand.   Also read Los Angeles Times review.
https://wolfhaven.org/wp-content/uploads/2015/04/NH_Logo_BlackOutline-300x300.png 0 0 Wolf Haven International https://wolfhaven.org/wp-content/uploads/2015/04/NH_Logo_BlackOutline-300x300.png Wolf Haven International2013-03-12 17:46:192017-08-23 15:14:31Book Review: How The Dog Became The Dog: From Wolves To Our Best Friends