Clarice is our oldest sanctuary resident.

Things are pretty normal in the sanctuary. Clarice, our oldest girl, continues to do well. Klondike, our newest guy, is acting like he’s been here his whole life and has really settled in well. And thankfully, no major health issues with anyone! 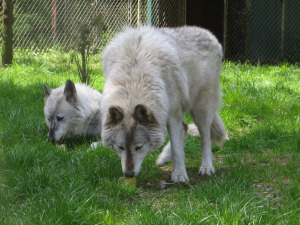 Breeding season is getting into full swing. We have our cameras up and recording, hoping to see signs of breeding activity from our recommended pairs. We have both red wolf pairs (Ruby/Tala and Jacob/Tamaska) recommended for breeding as well as one pre-release Mexican gray wolf pair (Coal/Fern) recommended. We also have a second pre-release pair ‘sort of’ recommended. The male is very genetically valuable and the two make a good match. However, the male is 15 years old! This is a situation of ‘if they have pups, great. If not, no big deal’. His name is Aldo, and we are all rooting for him – he would set the record for oldest Mexican gray wolf to reproduce if he does have pups!

The sanctuary is pretty much shut down for the breeding season. All the wolves get a bit more on edge, and many are barely interested in food this time of year. We try to limit our activities in the sanctuary and just give the wolves a chance to do their thing. 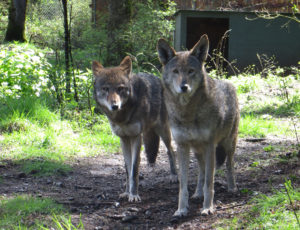 We just completed a new deckpen for Jacob and Tamaska, and it looks great! Hopefully they will get used to it quickly and start using it soon. They have a normal shelter they have used prior to the deckpen, but the deckpen is much roomier. Unfortunately, at this point the deckpen is also probably big, new, and scary to the two of them, but I’m sure curiosity will get the better of them soon.

In my last update, I mentioned that Mehina decided that she had had enough of the new laurels and cedars and pulled all but two of them out of the ground. Well, we re-planted them! So far she has only ripped two more out…This is turning out to be a battle of wills! Send some good thoughts to those poor plants, and hopefully Mehina will decide she actually does like them and let them be. Unfortunately we may need to eventually ‘rescue’ them and plant them somewhere far away from wolf teeth, but we’ll see.

As always, let me know if you have questions!

The return of grey wolves ‘not enough to restore Yellowstone’s ... Story’s Wolf Video from Yellowstone National Park
Scroll to top