Nearly exterminated in the wild during by the 1930s, the Mexican wolf remains one of the most endangered mammals in North America. In May, Wolf Haven’s Director of Animal Care Wendy Spencer assisted in the care & observation of two wolves scheduled for future release. This is Part 11 of an ongoing series of blog posts about her experience in Arizona.

Allison showed up at camp around 11 and I could not wait to tell her my news! No one had any idea that M1107 was traveling with another wolf so I knew this was BIG. And even though I just happened to be in the right place at the right time, I still considered it such a gift that I was the one to discover her. It was a cool feeling to know that I had actually contributed something to the pen sitting program. 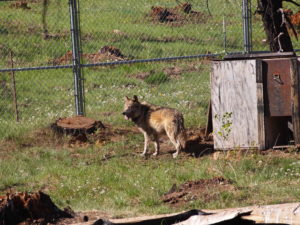 Allison seemed as excited as I was, but before she could return to the Alpine office, she asked me to accompany her to the pen so that we could take a peek inside the den box , as well as the rest of the pen, just to rule out that there were any pups (or sign of pups). Just as they had when Quinn and I were there, the wolves were running frantically. And just as the day before, we focused on the task at hand and did our den/ enclosure check as expediently as possible. As suspected, no pups, but at least the IFT had confirmation and could now move forward with picking a release date. 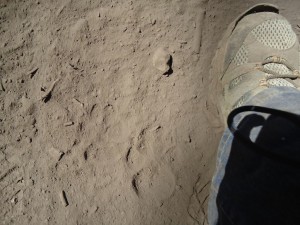 However, the discovery of the new wolf, coupled with the fact that they were hanging around the pen, posed a significant challenges for the release. Do they haze away the free ranging pair and let M1051 and F1126 out or do they relocate M1051 and F1126 to a new area? Either way, the pairs were bound to run into one another at some point and what they do to settle things will be something that they have to work out.

One thing was for certain, the pair would remain in the pen at least through the Memorial Day weekend and then the IFT would figure out the best course of action. And since the pair would remain in the pen and perhaps luring M1107 and the uncollared in, the IFT decided to set a few traps to try and trap the female so that they could not only determine where this female came from but more importantly, get a collar on her…. (to be continued)