Nearly exterminated in the wild during by the 1930s, the Mexican wolf remains one of the most endangered mammals in North America. In May, Wolf Haven’s Director of Animal Care Wendy Spencer assisted in the care & observation of two wolves scheduled for future release. This is Part 12 – the final chapter in an ongoing series of blog posts about her experience in Arizona.

The following morning, all was quiet at the pen. The wolves had opted to sleep in so it would be almost 40 minutes before I saw either one of them and even then, it was brief. We had heard fence fighting all night long until about 2:30 in the morning, so after such a long day and night, they were most likely exhausted. Since this was to be my last morning at the blind and watching the wolves, I said a little prayer and wished them a long, happy and safe life. 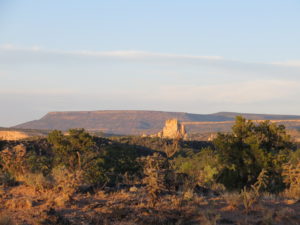 Back at camp, it was time to pack up and get on the road to Albuquerque. There was definitely a part of me that did not want to leave, so it was with mixed emotions that I loaded up and said goodbye. As I made towards Alpine, winding along the dry, dusty roads, I was reflected on the week that just passed. It was truly one of the most profound experiences I have ever had and even though it had only been a week, I felt as though I was leaving a little piece of my heart in the  Apache forest and with all those who lived there too.

Update: The day I departed, the IFT set traps by the pen in hopes of trapping and collaring the unknown wolf.  I received word a few days later that they were indeed able to trap and collar her and she is now identified as F1305. Because the free ranging pair continued to localize around the pen site and appeared prepared to defend their territory if the Coronado pack was released, it was with great disappointment that the IFT decided to return M1051 and F1126 back to captivity. It was by no means an easy decision for the field team but after giving it very careful consideration and evaluating all the pros and cons associated with going forward with the release, it was decided that removing the Coronado pack and returning them to captivity was in the best interest of all the wolves involved. However, just because the pair did not go out this season, they are still slated for release at some point in the next year. The Alpine wilderness has not seen the last of these two.