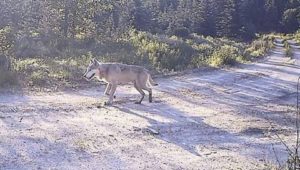 As the events of the Profanity Peak situation continue to unfold, we have been asked on multiple occasions why we are not offering to bring the remaining wolves into our sanctuary or supporting the efforts by our friends at Lockwood Animal Rescue Center (LARC) who have offered to bring the wolves to their facility in Southern California.

As an organization whose sole purpose is to conserve and protect wolves and their habitat, we understand that not offering sanctuary to the Profanity Peak wolves may seem incongruent to our mission. After all, one of the primary ways we fulfil our mission is to provide sanctuary to wolves in need of placement. As a sanctuary, our highest priority is ensuring that we provide our residents with the very best quality of life that we can, understanding full well that we will never be able to replicate conditions in the wild. Therefore, it is our belief that capturing wild wolves and bringing them into captivity does not serve that end.

We have been rescuing wolves (and wolfdogs) for nearly 35 years, and over the course of our long history, we have been asked many times to provide sanctuary for wild wolves who were facing destruction but we have agreed to do so only twice- once in 1991 and again in 2015.

In 1991, a yearling from the Nine Mile pack in Montana was brought in after her parents had been killed and she and her siblings began predating on livestock. Her family was the first to naturally recolonize into Montana after a decades-long absence, so the Nine Mile pack had gained a certain notoriety and many people, including state and federal agency personnel, did not want to see her killed. As a result, she was captured and transferred to Wolf Haven in the spring of 1991.  From all accounts, it was a difficult transition.  Tenino Montana, as she became known, spent the first few years of her life in captivity pacing and looking for a way out. Her enclosure had to be reinforced top and bottom with hot wire to prevent her from escaping. When I met her in 1998, she seemed to tolerate her life in captivity, but she was always aloof and behaved differently from the other wolves in the sanctuary. I cannot in good conscience say that she had a good quality of life and if presented with that situation again today, I do not think we would have made the same decision.

In 2015 we agreed to take in the Ruby Creek female. You may recall her story: she was the young wolf in NE Washington who spent most of her time hanging out with a producer’s livestock guardian dogs. She had become well habituated to human activity and became a fixture on the landscape within that community. WDFW tried for weeks to haze her away but to no avail. She would run from whatever aversive conditioning tactic was deployed only to return a short time later. It got to the point where the producer would come out in the morning to find this wolf curled up next his dogs’ kennels. The more accustomed she became to human activity, the shorter her flight distance became and hazing became completely ineffective. The situation was becoming untenable and lethal removal appeared to be the only option. However, this female was atypical in that she had become so comfortable around humans. Some wolves might travel on the fringes of towns or communities or even pass through someone’s property, but most do not linger, especially if humans are present. Given how uncharacteristic her behavior was, we thought that perhaps the Ruby Creek female might settle into life in captivity. On February 11, 2015 she was darted from a helicopter (WDFW had to wait until there was snow on the ground to be able to safely dart her) and transferred to Wolf Haven. She has been with us for over a year and she seems to have adapted well. Most importantly, she appears to have good quality of life. She has a male companion that she is very bonded with and positively interacts with, good food and a heavily vegetated one –plus acre enclosure. She rarely sees people- only animal care access that part of the sanctuary – and we do not force ourselves on her. We let her “be” as much as possible.

The Ruby Creek female is an exception- far from the norm. Most wolves go well out of their way to avoid humans. In fact, unless they are exposed to humans during the critical period of socialization (20-77 days old), it is very unlikely that they will ever be comfortable around them.

Unlike domestic dogs, the critical period for socialization for wolves begins at approximately two- three weeks of age (dogs begin later). When the socialization “window” is open,  pups explore their surroundings without fear and will retain familiarity throughout their lives with those things they come in contact with. As the period progresses, fear and neophobic behavior increases and once the window closes at approximately 77 days, new sights, sounds and smells will elicit a fear response. This is why breeders of captive wolves and wolfdogs will pull pups away from their mothers as early as two-days of age, in order to immediately expose them to humans while that critical window is open. Human contact is constantly reinforced and even then, it is no guarantee that these animals will ever be socialized. We have rescued hundreds of wolves and wolfdogs who have been hand-reared and still remain extremely wary of humans so imagine how stressful a forced relationship with humans could be for a wild wolf.

Simply stated, wolves belong in the wild, not in captivity. Even under the best of circumstances, nothing we could provide would replicate the conditions that free ranging wolves are evolutionarily designed for: family life, cooperative hunting, cultural transmission, immigration, emigration and traversing long distances (sometimes 35-40 miles a day) – all things that life inside a chain link enclosure cannot offer. For an animal who has only known autonomy, their choices become limited and captivity reifies human control over all aspects of their lives.

Even if we suppose, for the sake of argument, that it would be in the best interest to bring the remaining Profanity Peak wolves into captivity given the terrain and the time of year, it would be extremely difficult to safely capture them. Trapping, particularly after all the human activity in the area, would be highly unlikely and trying to chemically immobilize them from a helicopter without snow on the ground to slow the wolves down would be dangerous and quite possibly fatal.

Bringing these wolves into captivity is not the answer to coexistence. It will not serve as moral repair and it will not make things right for animals who are paying the price for human interests. If these wolves were brought into captivity, people may breathe a sigh of relief because the lives of these animals were spared- giving little thought to what that life might look like.They may be inclined to feel that the moral work has been done. However, life in captivity is not restitution nor is it the way to adjudicate conflict.

Coexistence requires attending to the relationships between all parties; it involves examining how the relationships are impacted by systems beyond the individuals and entities and thus enables us to focus on the areas of those systems that need improvement. It is beyond tragic when any individual loses his or her life but bringing wild wolves into captivity glosses over the deeper issues. It is a temporary solution and not sustainable for we could never build enough enclosures to house all the wolves who will conflict with human interests and why would we ever want to?

Washington state faces a fork in the road: continue down the path that pits individuals and communities against one another which does nothing to prevent wolves from losing their lives (the Rockies is a perfect example). Or, be courageous and take the road less traveled which could lead us to meaningful, enduring conflict transformation  so that the death of the Profanity Peak wolves will not have been in vain.