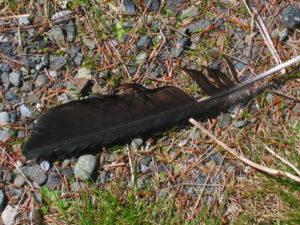 When it comes to the noises of the human world, Wolf Haven is fairly quiet. Mild traffic, the occasional police or fire siren, and the hum of a nearby train are often the only indications that urban life is around. The wolves know it too and will sing along with the passing siren. We are fortunate to be serenaded by a chorus of 51 wolves for other reasons too, like the sight of the feeding truck. But wolves aren’t the only animals you will hear at Wolf Haven. 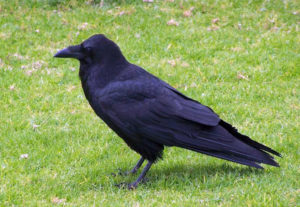 If you look into the trees you will likely see our friendly neighbors in the sky, ravens.

Before there were wolves at Wolf Haven, there were no resident ravens. In the wild, wolves and raven have a close working relationship. When wolves make a kill, the ravens will feed on the carcass once the wolves leave. Likewise, raven activity on a carcass alerts wolves to a meal they can scavenge when times are tight. Some also say that ravens “tell” wolves where a herd of ungulates are located, so the wolves can make the kill and in turn, feed the ravens.

The relationship between wolves and ravens seems to go beyond survival. Scientists have even observed what appears to be wolves and raven engaged in play. Ravens will sometimes bomb the wolves, grabbing tufts of fur or they will be seen swooping down, staying just out of jaws reach. While I cannot attest to viewing wolves and ravens playing at Wolf Haven, I have certainly seen ravens take food that didn’t quite make it to the wolves. I have also seen ravens that didn’t make it back to the trees….if you catch my drift. 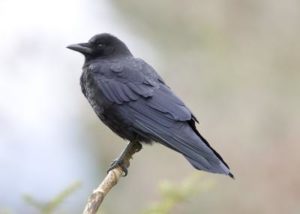 We also have a small number of crows here at Wolf Haven. Crows and ravens are part of the corvid family. While very similar, ravens have bigger features and are more solitary. Recently as a part of staff enrichment, we gathered to watch the PBS documentary, A Murder of Crows. This documentary focused on the intelligence of crows and their ability to problem-solve, with one study showing crows are capable of multi-level thinking, such as getting a smaller stick to retrieve a bigger stick to finally get food. Astonishingly, crows also have 250 distinct calls and can recognize a human face, based on positive or negative experiences, for up to two years. They will scold those that have done them wrong in the past, alerting others to the danger.

As I type, I can hear the caws of both ravens and crows amongst the silence. I can only wonder what they’re saying.

(Special thanks to volunteer and bird expert Treesa Hertzel for maintaining the Wolf Haven bird watch report and “Birds of Wolf Haven page for our website.)

The Heat is On Splish Splash
Scroll to top