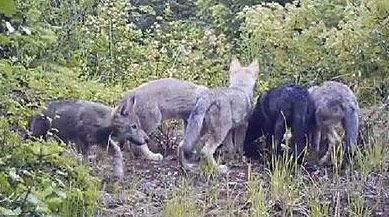 In the upcoming issue Wolf Tracks magazine, Wolf Haven executive director Diane Gallegos writes about the family of wolves known as the The Huckleberry Pack and the conflict that ensued following depredation of sheep placed in their territory. What can we learn from this scenario?

“Sheep dropped on top of a wolf pack in difficult terrain without proactive and diligent use of nonlethal deterrents resulted in a conflict that cost taxpayers and the livestock producer thousands
of dollars, and cost the endangered female wolf and dozens of sheep their lives.”