Since Animal Care staff doesn’t go into enclosures for unnecessary reasons, and we take the highest precautions when we do go in, my biggest fear at Wolf Haven isn’t the animals – at least not the resident animals. I am afraid of snakes.

There, I said it. I was astonished by the amount of Garter Snakes that were on this property in the summer (and those are just the ones that I can see!) One sneaky snake gave me a heart attack after he maneuvered himself to the top off cedar fence, just soaking up the sun. I walked past him at least twice before I saw his beady little eyes staring into mine.

As a side note, should a snake have the misfortune of being in an enclosure, they may be used as a toy. Carosal the coyote is a great snake catcher. Not that I want to see snakes die, mind you. 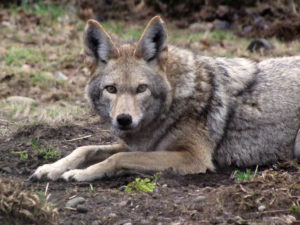 Since we’re talking about non-resident creatures, I want to mention the bees and hornets. While weed whacking in the back part of the sanctuary, wearing my protective face mask and weed whacker vest with attached weed whacker, I must have stumbled upon a nest. I was immediately stung four times on my right shoulder and once on my hand, as I was running and stripping off my gear. 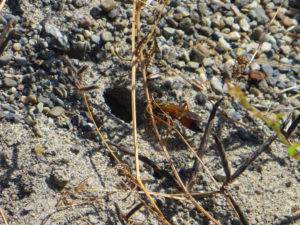 Up Next:  What’s That Smell?