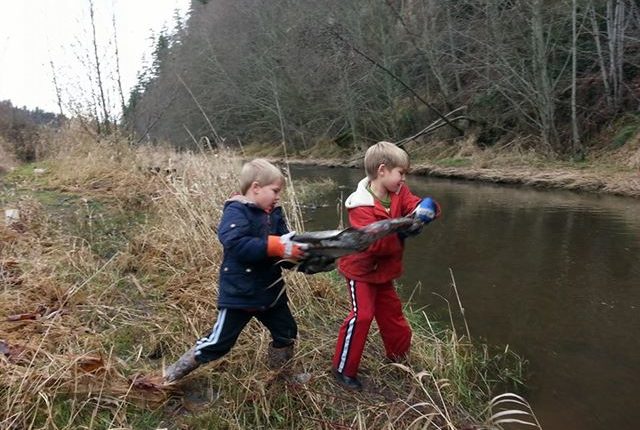 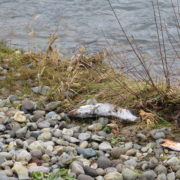 In the Pacific Northwest, there are 137 different species that use salmon, or the marine derived nutrients they bring with them (a special isotope of Nitrogen that is otherwise not available to terrestrial organisms), when they come upstream to spawn. Bears, eagles, freshwater invertebrates, the vegetation around a stream, and even salmon fry (the point in the salmon life cycle when it has lost its egg sack, but is not ready to migrate to the ocean), to name a few, feed on salmon carcasses or the nutrients they leave behind.  Wolves also feed upon salmon in coastal British Columbia and Alaska.  Wolves provide food for other scavengers by leaving salmon carcasses partially consumed. The first confirmed pack of wolves in Washington in over 70 years were related to these coastal wolves, and so given the opportunity, we would also have fisher-wolves in our state!

Salmon are anadramous, meaning they can live in saltwater and freshwater by changing their body chemistry, and most salmon 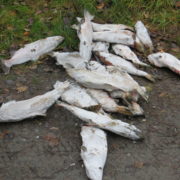 are semalparous, meaning they only mate once and then they die. Because of this, salmon have a unique life cycle. Salmon are born in freshwater, where they imprint on the specific chemical smell of their stream, grow for a few months and migrate to saltwater to live for a couple of years, then migrate back to their stream when they are ready to reproduce.

Every year, the Nisqually Clear Creek Hatchery raises thousands of Chinook Salmon (also known as King Salmon, Oncorhynchus tshawytscha) fry to be released into the Nisqually, where they imprint on the river’s chemistry, and migrate out to sea. When they come back, as adults to spawn, fishermen can take the hatchery fish, and the rest get caught again by Nisqually Clear Creek Hatchery in nets that stretch across the whole river. The hatchery cuts these fish open to take the eggs and sperm, so they can raise the next year’s salmon. 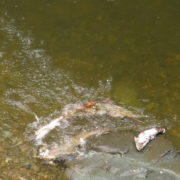 Chinook salmon carcasses are a food source for several animals, including other salmon.

Chinook are endangered in the wild, which means that people are not allowed to kill them. Fishermen and the hatchery can tell the difference between hatchery and wild fish by looking to see if the fish has its adipose fin. The adipose fin, a fleshy fin between the dorsal fin and the tail on the back of salmon, is cut off of Chinook fry in the hatchery, so the wild fish still have this fin. If a caught fish has an adipose fin, it must be put back in the river. The hatchery raises Chinook to be used by the tribe, fishermen, military families and other groups, and to take strain off of the wild population.

If all these fish are caught before they spawn and die, then the riparian ecosystems are missing out on an important source of nutrients. To solve this problem, the Nisqually Clear Creek Hatchery takes hundreds of salmon that are not fit for human consumption, freezes them to -11°F to kill any diseases, and saves them to be thrown back into rivers. (Unless salmon is frozen to this extreme temperature, it can cause illness in your dog!) The hatchery partners with schools to bring students on fish flinging field trips and they host one public volunteer fish throwing day each year.

On Saturday, December 14th, a crew from Wolf Haven joined forces with other volunteers to throw salmon. 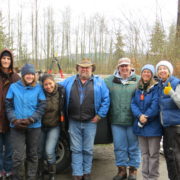 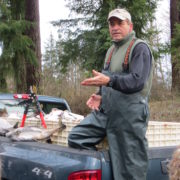 We followed Nisqually Clear Creek’s Emiliano Perez (Nano) to different sites around Eatonville and the Nisqually River to throw the fish. When we got to each location, the fish were thrown out of huge containers on the back of the hatchery’s trucks.

Next, each fish had to have its tail cut off with bolt cutters, so that Fish and Wildlife scientists doing fish count surveys later in winter can tell the difference between the skeletal remains of wild Chinook and hatchery Chinook. Then the throwing began! We all aimed to get the fish into the water, but any fish that missed the mark were OK, 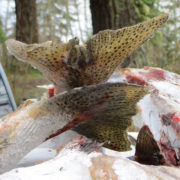 because they could be more easily accessed by raccoons, bears, eagles, and other terrestrial 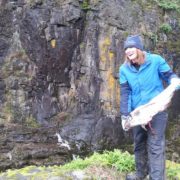 animals who would love to eat a dead salmon. The weather was great, with the only cold part being the fish we were holding, and it didn’t even get that smelly until the fish began to thaw throughout the morning.

If you live in the Olympia area, and want to see Chinook salmon yourself, in mid-August, a different run of Chinook salmon start to line up at the 5th Avenue bridge in downtown Olympia, to be let past the dam, into Capitol Lake and up the Deschutes River. By mid-September, the fish are going up the fish ladder at Tumwater Falls Park and into Washington Department of Fish and Wildlife’s holding tanks, which can be seen by the public at the park. Once a week, Fish and Wildlife will come to the park to cut open Chinook and gather sperm and eggs. In the spring you can come to Tumwater Falls Park to watch the Chinook fry be released back into the Deschutes.