Nearly exterminated in the wild during by the 1930s, the Mexican wolf remains one of the most endangered mammals in North America. In May, Wolf Haven’s Director of Animal Care Wendy Spencer assisted in the care & observation of two wolves scheduled for future release. This is Part 8 of an ongoing series of blog posts about her experience in Arizona. 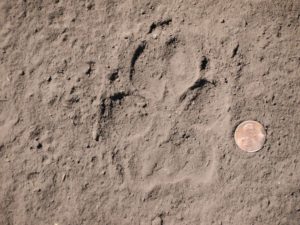 Recently the IFT had confirmed the alpha female of the Bluestem pack had 5 pups, which brought their total to 10- the largest pack in the area. In order to try and insure that they stayed out of trouble, the IFT decided to temporarily put out a cache pile so Quinn and I left a few dozen pounds of carnivore logs for them. The wolves were obviously coming in and feeding off the pile because tracks were all around the area and there was a trail camera set up in order to visually confirm that the wolves were indeed coming in and eating from it rather than being totally scavenged by ravens.

Then we went looking for the remaining member of the Hawk’s Nest pack. We drove over to his known range and because the wolves prefer to travel on the existing forest service roads, it was fairly easy to pick up his tracks. It was obvious to me that Quinn was familiar with this male and his habits because Quinn just opened the door to his truck as he slowly drove until he was able to spot a track. From there we got out and followed his trail a bit before it disappeared into the tree line. 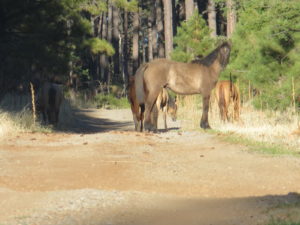 About 100 horses that wandered from the Fort Apache Indian Reservation live in the area.

As we drove back to the trailer we came across a group of wild horses grazing in a meadow off the side of the road. Apparently the forest is home to about 100 horses that have wandered off the Fort Apache Indian Reservation (FAIR) and now live amongst the elk, deer and big horn sheep that call the forest home. They were so beautiful and majestic- I just sat and watched from a distance while they were in the area. They didn’t seem to give a rip about us, but as a horse person, I was thrilled to have a chance to see them- what a gift! 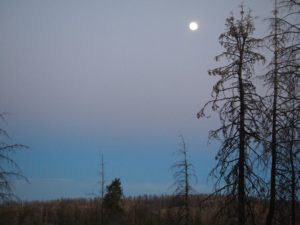 Beautiful moon shines over the landscape

Nighttime in the Apache is magical- the moon was waxing gibbous that week so each night, the forest was bathed in pale yellow moonlight, silhouetting the old aspens against the midnight skies that were adorned with millions of stars. The forest came alive at night and I imagined the revelries of its inhabitants as I stood with my telemetry equipment in hand, afraid to turn it on, lest it somehow disturb them. In those moments, I had an abiding awareness of my intrusion into this secret, enchanted world of the forest but did my best to minimize my incursion………… (to be continued)