Nearly exterminated in the wild during by the 1930s, the Mexican wolf remains one of the most endangered mammals in North America. In May, Wolf Haven’s Director of Animal Care Wendy Spencer assisted in the care & observation of two wolves scheduled for future release. This is Part 7 of an ongoing series of blog posts about her experience in Arizona.

The remainder of the day was fairly uneventful. Erin had spent the day with Allison doing a telemetry flight, locating (by signal not visual) not only the AZ wolves, but the NM wolves as well. She was happy to report that they were able to pick up everyone’s signal and all the wolves were where they were supposed to be. Earlier that morning I had picked up M1107’s signal, but it was faint and he seemed to be tracking to the southwest, towards the Fort Apache Indian Reservation (FAIR), which was confirmed by their telemetry flight. Later that evening though, he was back, and for a few hours, his signal was very strong coming from the direction of the pen. I am ever amazed at how incredibly mobile these wolves are- M1107 easily traveled  40-50 miles in less than a 12 hour time span.

Periodically through the night the wolves’ howls would drift up to the trailer, waking me from sleep. Because I live on site here at Wolf Haven, I have become quite familiar with their lullaby so the first few times it took a moment for my mind to register that I was in the middle of the Alpine wilderness, listening to wild wolves.

The following morning at the blind was also fairly uneventful. I arrived at 4:45, just before the sun made its way over the ridge and though the wolves were already up and about, they paid me no mind. For the next 2 hours they would wander in and out of my field of view but the ravens would usually let me know when they were about to wander into sight. At any given moment there were at least 15 ravens hanging around, usually on the leftover carcasses and for the most part, the wolves ignored them- except when they didn’t. F1126 seemed to get the most irritated with them and on several occasions I observed her lower her head deliberately and run towards them, sending the ravens into a squawking flurry of black. They obviously didn’t take her threats very serious though because as soon as she moved on, they were back. 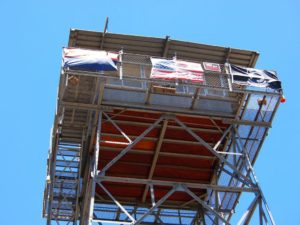 Later that day I headed out to spend the day in the field with Quinn. I am sure it was terribly mundane for him but for me, it was one of the best days ever! We drove to the near-by fire tower and climbed to the top to do telemetry checks on not only M1107 (who we hadn’t heard since the previous night) as well as the Maverick pack.

From our vantage point I could see almost 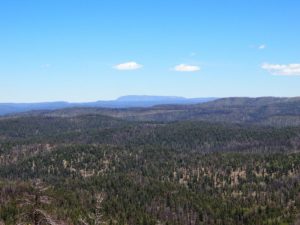 the entire recovery area in Arizona and even part of the Gila in New Mexico- so vast and rugged. To be able to look out as far as my eyes could see and know that the wolves were out there somewhere was simply awesome…… (to be continued)