Nearly exterminated in the wild during by the 1930s, the Mexican wolf remains one of the most endangered mammals in North America. In May, Wolf Haven’s Director of Animal Care Wendy Spencer assisted in the care & observation of two wolves scheduled for future release. This is Part 6 of an ongoing series of blog posts about her experience in Arizona. 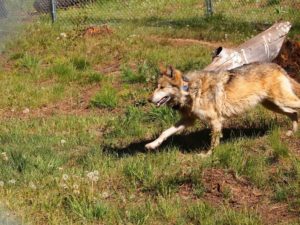 One of the two collared wolves intended for release into the wild.

A few hours later Quinn from the IFT (Interagency Field Team) showed up at camp and he and I drove down to the pen to feed and water the wolves. As we approached the pen, we noticed the wolves were running hard and because it was already in the 70’s,it was important to do what we needed to as expediently as possible and then get out. The pen is situated in the center of a basin, will hillside surrounding all but the northern side. The pen itself looked very similar to the set-up we have at home. It was approximately 1/3 of an acre in size and is comprised of  9 gauge, 8 ft high vertical fencing with an overhang as well as a 3 ft ground skirt hog -ringed to the bottom of the vertical at a 90 degree angle.  It took the field team about 2 weeks to construct the pen- a very ambitious endeavor in the middle of nowhere! There was little “furniture” inside the pen aside from a wooden den box but there were several down trees and stumps that the wolves had dug day beds next to. 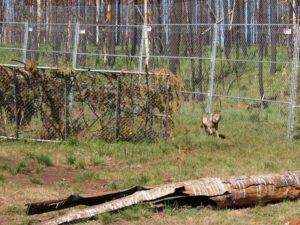 We quickly fed out 2 back elk legs and changed their water troughs before exiting the pen. Once again, the field team needed a fresh eye to look at the female to try and determine whether or not she was nursing, and a quick glance was all I needed. As much as I had hoped otherwise, I felt very confident that there were no pups- it was much easier to see in person that her abdomen was tucked up which was inconsistent with nursing. It takes 10-14 days for the female’s milk to dry up, so if she did whelp or abort or reabsorb, it had been at least that long. 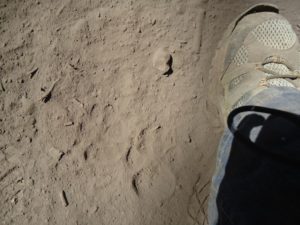 Print left by one of penned Mexican gray wolves.

This was not the news that the IFT was hoping to hear. The release date had already been pushed back once due to the prospect of pups, but if there were indeed no pups, what would that now mean for release? I was told that most likely the date would be pushed back up- perhaps after the holiday weekend. No doubt an IFT conference call was in order….. (to be continued)