Nearly exterminated in the wild during by the 1930s, the Mexican wolf remains one of the most endangered mammals in North America. In May, Wolf Haven’s Director of Animal Care Wendy Spencer assisted in the care & observation of two wolves scheduled for future release. This is Part 4 of an ongoing series of blog posts about her experience in Arizona. 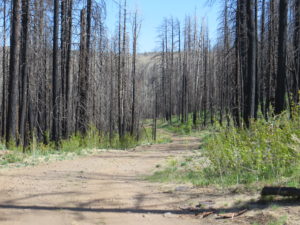 Charred aspens can be seen amidst the new aspen growth in meadow.

By the time Allison left, it was about 3:00 in the afternoon so after Erin and I got settled in the trailer and figured out who was sleeping where, I grabbed my journal and decided to go for a walk. The pen was in a southerly direction from camp so I decided to head north to see what I would find. I didn’t have to go far- only about a ¼ mile before I came to an open meadow on the northwest aspect of the ridge where our camp was located. There I sat in the afternoon sun, captivated by the beauty that surrounded me. Evidence of the fire was all around me but even in the midst of so much devastation there was such beauty and life. The tall, charred aspen were a stark contrast against the pristine blue sky and brilliant green of the young aspen regrowth as it danced in the afternoon wind. Ravens and songbirds soared over head and everywhere I looked, grasshoppers flitted about, the din of their collective chirping rivaling the sound of the aspen leaves rustling in the wind. 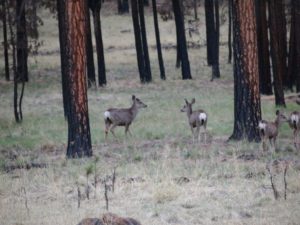 A few hundred feet away there was a group of mule deer grazing – we regarded one another briefly, and after giving me a dismissive glance, they went out their business. For hours I sat, Thoreau’s words “I went to the woods because I wished to live deliberately “repeatedly running through my mind. I felt grateful, blessed, alive.  Once the afternoon sun began to sink below the far off ridge line, I decided to head back. 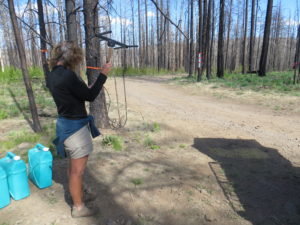 Sunset is early in the Apache- 7:30, so after a light dinner, it was time to turn in since we both had to be up early – 3:30am. Erin was going to spend a day in the field with the IFT and I needed to get to the blind at first light (4:45am). Throughout the night we took turns getting our telemetry readings- not only were we monitoring the pair, but there was also another wolf hanging around, M1107, the former alpha male of the now defunct Rim pack. His mate had been removed from the wild the previous year so now he just wandered his former range and the nearby Fort Apache Indian Reservation (FAIR), presumably in search of a new mate. We picked up his faint signal to the north of the pen during the night so we knew he was still in the area.

Finding Sanctuary
Back from the Brink - Wolf Nation - NPR interview
What It’s Like to Work With Wolves (part 5 of a 5-part series)
Raise Your Voice for Wolves - No to Delist!
Sheridan PR blog: "There's No 'I' in Bart"
February World of Wolves - Your Gift Did This