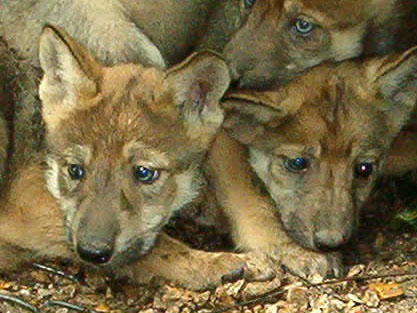 The first pack of Mexican gray wolves that were transferred from Wolf Haven for release into the wild was the Hawk’s Nest pack, in 1998. Two year’s later, on March 12, 2000, a second group of endangered Mexican wolves, the Cienega pack, left Wolf Haven for Seattle, WA, and then flown to AZ. Once there,  the pack was transported to the heart of the Apache National Forest.

The group was placed in a soft wire mesh acclimation pen in the hopes that they would spend some time acclimating and subsequently localizing in the area once released. However, the pack had other ideas. Within 45 minutes, they chewed through the mesh and all but one male pup (m620) self –released and left the pen. By March 14th, the pup ventured from the pen and reunited with his family and together, they roamed the wilds of their new home.