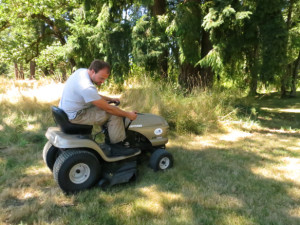 The Pacific Northwest is known for its rainy days, but the summer usually brings lots of sun. As you might guess, this is a great recipe for plants to grow, more specifically, grass. The animal care staff tries to mow the grass in the sanctuary on the footpaths outside of the enclosures on Tuesdays, since we are closed for visits. Our mowing routine is nothing out of the ordinary; one person cuts the roads with the rider mower, two people weed whack closer to the fences and around obstacles. As with everything that needs to get done in the sanctuary, we do it with the animal’s well-being and comfort as the top priority. 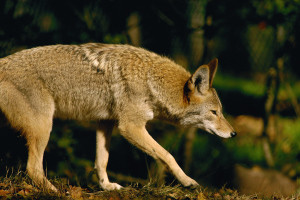 Wolves are neophobic, or afraid of new things. Unlike dogs, wolves are not very brave and outgoing when it comes to new things in their environment. Coyotes are braver than wolves which is why they have been so successful integrating with people and our urban ways. So when it comes to cutting grass, you would expect our residents to stay away from us and the mowers. Guess again! There seems to be two reactions to mowing day; indifference, and curiosity. 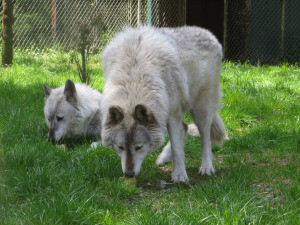 Indifference. There are some residents that just don’t seem to care that the animal care staff is operating loud machinery. Indifference is mostly manifested by them continuing to lie on the ground or carrying on with their normal routine. Some indifferent wolves include Jesse and Shiloh and Mehina and Klondike. 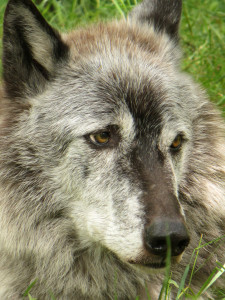 Curiosity. This is the reaction most residents have and it baffles me. Mowing day is met not with fear, but active interest. Even skittish animals seem to have a newfound bravery when the mower is around. Since Shoka arrived at the sanctuary, he has been wary of me. I catch glimpses of him and hear huffs as I walk past during feeding or doing the walkthrough. I do what needs to be done and I move on. But just this morning as I was on the rider mower, I went past Shoka’s enclosure and he was about five feet away from the fence just watching. No huffing. No running to the back of the enclosure. Just watching. 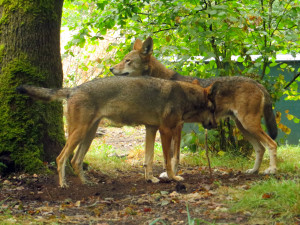 Red wolves Ruby and Tala, while hard to see on visits, are often at the fence in full view while we are mowing the grass. Same goes for the coyotes. Some wolves like Lonnie, will rub the fence line after the mower or weed whacker has passed to get the fresh-cut grass smell. After all, who doesn’t like that?