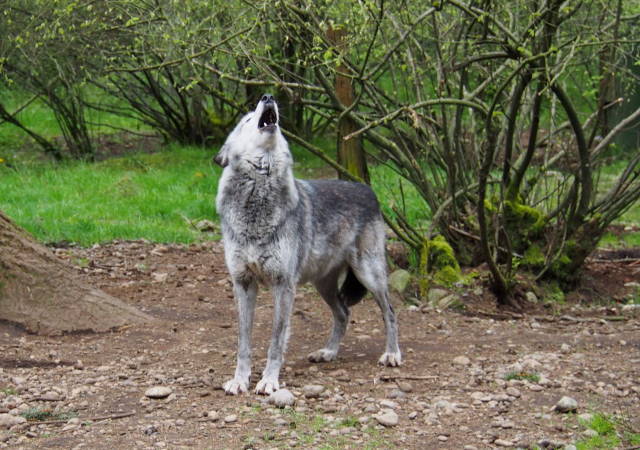 Ladyhawk shows off her howl 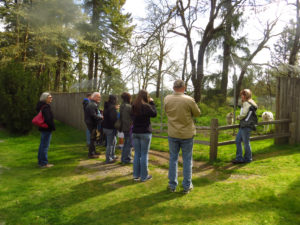 Volunteer Traci leads a group through the sanctuary

On Saturday, Wolf Haven volunteer visit guide Traci was giving the first visit of the day, assisted by her flip chart turner, Greg (that’s me).  At Enclosure #5, a howl started way out in the off-visit area.  It took a long time to gain momentum, but soon the whole gang was fully engaged in the music making. Caedus and Ladyhawk put on a show at the front of their enclosure as did Klondike and Mehina. 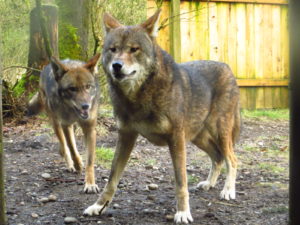 Ruby and Tala even made an appearance to lend their unique voices. The howl went on for a long time much to the delight of the visitors who were snapping photos and recording the sounds.  Finally, Ladyhawk had enough.  She decided it was time to shut Caedus up because she was in the mood to play.  She bent over in a quasi-submissive pose and attempted to get his attention.  When that didn’t work, she tried to grab his jaw to stop the howling.  Caedus gave it a thought for a moment, but went back to what he loves almost as much as eating, howling.

Ladyhawk was not to be deterred and continued to try to get Caedus’s attention.  Finally, the howl started to diminish and the two became engaged in a bit of gentle roughhousing. Our sanctuary visitors were treated to a wonderful live display of wolf communication.

July World of Wolves: Meet Aki & Shoka The Heat is On
Scroll to top