The kind of salmon that is donated to us from Pike Place Fish Market has quite an interesting history behind it. We would like to dedicate this space to explore what it takes for the salmon to end up as part of our resident wolves’ diet.

The first –and most awesome- fact is the species’ biology itself. “Chum” or “keta” salmon (Oncorhynchus keta) is a species of anadromous fish, which means they migrate hundreds of kilometers upriver from the sea into fresh water to spawn. The journey of keta salmon begins when an average of 4,000 eggs, which are layed in a gravel bed in the upper reaches of a stream, hatch. Young salmon spend the first years in the river where they were born until they reach the age of three and then undergo a series of physiological changes that will allow them to survive the big shift from fresh to saltwater: their body chemistry has to adjust in order to cope with the higher salt levels they will encounter in the Pacific Ocean. At the ocean, they spend between two and three years. 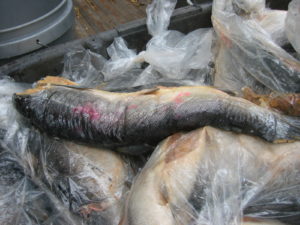 The salmon that will eventually come to Wolf Haven face the end of their lives at this point: they get fished in the Pacific coasts anywhere from Alaska to California. But the ones that escape the fishermen have an amazing mission ahead. They will swim the ocean until they are sexually mature and then start traveling all the way back to spawn at the exact same place they were born. Scientific studies show it’s due to olfactory memory that they are able to find the precise location where they started their life (it’s like when a particular smell reminds us of the house we lived in when we were little …though a little more sophisticated). Once they find it, the female lays the eggs and the male sprays his sperm before she covers them with gravel. Mother and father protect the nest for some days, but soon their bodies start to deteriorate. Their metabolism –now adapted to saltwater- is not longer capable of thriving in the river’s environment, and they die. 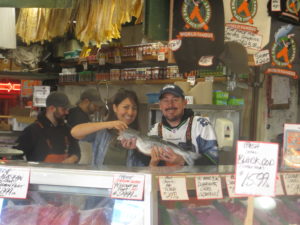 Some of the ones that get caught in the ocean go to Pike Place Fish Co., the iconic seafood vendor at Pike Place Market, in Seattle, Washington. Pike Place Fish Co. started back in 1965, when John Yokoyama purchased the little fish stand he worked at. He transformed a small, unnoticeable and almost broke fish business into THE seafood dealer. To stop at Pike Place Fish is a most do for every visitor at the Market, mainly due to the famous “Flying fish presentations” A crew of fishmongers throw the fish that is being sold in the air, while yelling funny things and having a good time with the costumers. 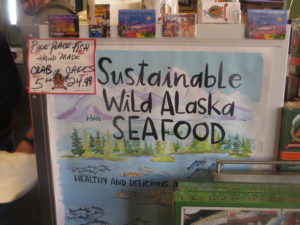 “Flying fish” sounds like fun, but when it comes to expensive salmon, action scenes seem too risky… for the business.“Wild king salmon is worth so much money that we needed a cheaper and smaller salmon for stunt fish” shares Anders Miller, long time staff at Pike Place Fish Co. “People come here to buy good salmon and want to see the whole show, but we cannot risk damaging the nice stuff.” So this is where our friend, the chum salmon, re-enters the scene: it is big and good looking enough to be used as body-cover for the Wild King Salmon. (So if you thought stunt doubles were used only in movies and only for famous humans, you were wrong: fancy fish have doubles too!)

Between two to five chum salmons are used everyday. They get thrown in the air several times and get photographed by hundreds of people -pictures that will travel the world. As these fish cannot be sold they are donated to wildlife facilities, such as Wolf Haven International. “We feel very happy to know that all this fish is used for feeding rescued animals, instead of being tossed away,” states Anders. 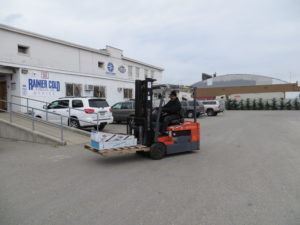 Driver at Rainier Cold Storage carefully navigates a pallet full of frozen salmon over to the waiting Wolf Haven vehicle.

When the chum salmon conclude their stunt “flying” run, they are shipped to Rainier Cold Storage Inc., a warehouse located in south Seattle, where they are deeply frozen for several days. The extreme low temperatures (-5 Fahrenheit) kill any microorganisms that could represent a risk for the wolves, like Neorickettsia helminthoeca, the bacteria responsible for producing the famous “salmon poisoning disease” (a fatal gastrointestinal infection).

Once a good amount of fish has accumulated, they contact us to have it picked

Kim filling the trunk of the Saturn with frozen salmon.

up. We drive up there with any vehicle we have available (we once squeezed 43 frozen whole salmon into our beloved Saturn’s trunk!) and bring them back to the wolves. You can imagine that the trip back to Wolf Haven is quite a stinky one, though totally worth it. The wolves seem to really enjoy the 7 pounds (avg.) of high quality protein, fat and minerals. 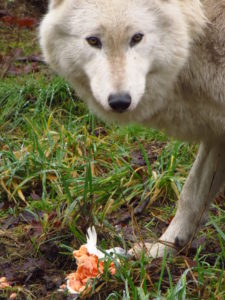 Whether they roll on it, pee on it, eat it, or all of the above, salmon is always a big success!

We sincerely thank our friends from Pike Place Fish Co. for their kind donation, and Rainier Cold Storage Inc. for making it safe for the wolves.