There are currently 19 Mexican gray wolves living at Wolf Haven International. All are part of a binational Mexican wolf Species Survival Plan (SSP) Program. Of these animals, there is only one pair that sanctuary guests have the opportunity to admire during their guided visit: Mexican wolves M657 and F907 (otherwise known by in-house names Diablo and Gypsy).

All SSP programs were created to save highly endangered species from vanishing permanently by means of building a captive population through selective reproduction planning. Eventually, particular individuals could be potentially released into the wild. Both Diablo and Gypsy were born as part of the Mexican wolf captive breeding program, in 2000 at Detroit Zoological Institute and in 2004 at Río Grande Zoo, respectively. Diablo was transferred to Wolf Haven in 2004 and Gypsy joined him in 2005; ever since they have been sharing an enclosure on the public route. 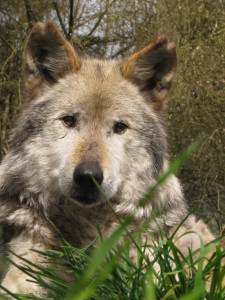 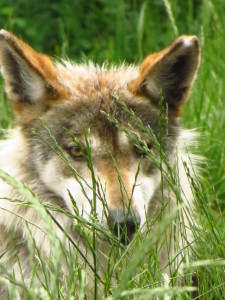 They are such a cute pair to observe. Even though it isn’t huge, from a physical perspective their age difference has become quite noticeable. Gypsy is an 11-year old that looks like a blooming yearling; her sparkling big eyes and flamboyant coat often make visitors sigh. On the other hand, handsome Diablo’s 15-year old body is showing its natural decline; his movements are at times clumsy, he has lost almost all of his hearing and his sight isn’t that great either. That does not deter him from teaming up with “Gyps” every morning and engaging in enthusiastic displays with all their enclosure neighbors. Beyond the physical differences, their shared self-confident and playful character makes Gypsy and Diablo wonderful life mates as they celebrate ten years of togetherness.

This article originally appeared in the Fall 2015 issue of Wolf Tracks magazine. 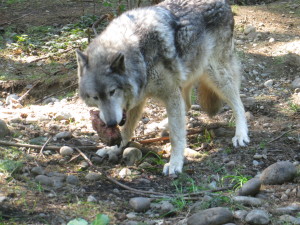 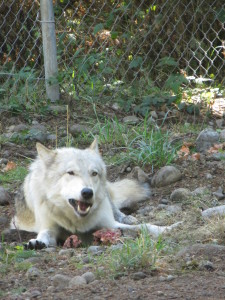 Lakota, a male wolf, takes a leisurely approach to dining.

It has been almost two years since I last wrote about wolf “loaf.” As you may or may not recall, Wolf Haven is part of a program called Sustainable Solutions. Their goal is to reduce food waste caused by unsold products. By connecting animal facilities like Wolf Haven and food stores, meat that would normally be disposed of in a landfill or a rendering plant can be utilized. Disposing of unsold food items costs the stores money. Animal rescues often have a never-ending need for meat. Through Sustainable Solutions, both party’s needs are met, while cost and waste can be reduced. 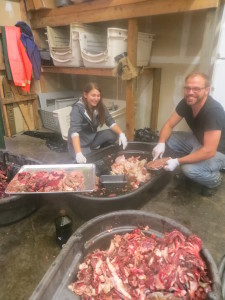 Every Friday, two animal care staff hop into our trusty white cargo van, head to a popular food store and collect roughly 800-900 lbs. of scrap meat. This meat ranges from unusable items such as bacon, ham, and other processed meats, to usable steak, chicken, and beef. We do not feed processed meats due to the high fat and sodium content; on average, I would say that half of the meat is usable.

After we sort through the meat, we need to feed it to the wolves efficiently. Originally we made loaf in disposable, paper food trays (like you get French fries in at a fair). We would pack the bottom with ground beef, lay on a piece of chicken, and top it off with a steak. Once formed, each loaf was put in the freezer. This yielded a roughly 2 lb. loaf that was easy to feed and utilized as much of the good meat as possible. When we were ready to feed the loaf, we pulled it from the freezer to defrost and then had to remove the food trays, often stuck to the meat. That was Wolf Loaf; we now enter Wolf Loaf 2.0! 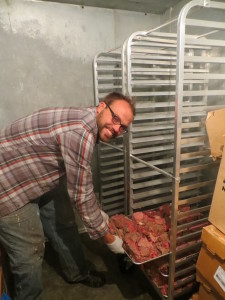 In mid-summer, I began looking at ways to store the loaf better in our small freezer. Meat that we purchase plus the often-present deer carcasses used for feeding take up a lot of space. Add a couple of 50-gallon tubs for loaves, and you’re nearly out of room.  A lot of vertical space wasn’t utilized, so a shelf made sense. We purchased two bread carts for storing the loaf, as well as their corresponding metal trays.

We also wanted to get away from using paper food trays. We didn’t like the waste they produced, as well as time (maybe 10 minutes total) lost removing them from the loaf. My previous experience at another wolf facility led us to start using bread pans. We could pack the ground beef, chicken, and steak into the bread pan and turn it over on a tray. We then put the loaf tray on the rack and freeze them. Step two complete!

Feeding scrap beef provided some challenges. When tossing the scrap meat over the fence, pieces inevitably got stuck in the fence, which the person feeding had to dislodge.  As good as our throwing arms may be, pieces of meat also got stuck in branches and taken away by ravens.  Reducing waste in the form of lost meat was another huge factor. 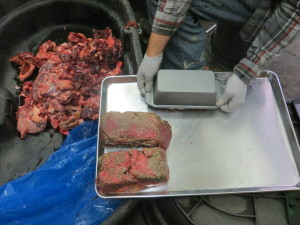 The art of making loaves

By combining the donated meat and scrap beef, we can make bigger loaves and go from a 2 lb. loaf to a 4 lb. loaf easily. Feeding 4 lb. loaves twice a week equals 8 lbs. Since we had been feeding 4 lbs. of scrap beef and 2 lb. loaf twice a week, each wolf still gets the same amount of meat.

With all the pieces in place, we are now on our fifth week of feeding the new loaves. This week will be our first time not feeding scrap beef. With this new system, we hope to reduce waste and become more efficient, a plus for humans and wolves! 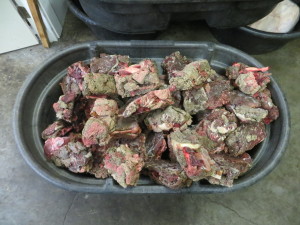 Partially thawed loaves are ready to give to the wolves

Ah, Fall – a time of pumpkins, spiced apple cider, fiery-colored autumn leaves and trick-or-treaters. But look at what’s blooming on our prairie right now. These beautiful plants typically flower in spring or early summer – not October. 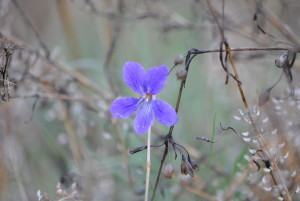 Despite its name, the Early Blue Violet (Viola adunca) blooms after a rain, but October is a bit late for it. 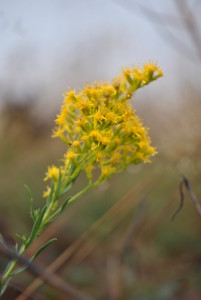 Goldenrod (Solidago sp.) is a great late season nectar source for insects, but October is late for it as well. 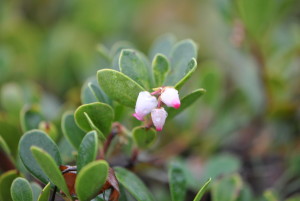 Kinnikinnick (Arctostaphylos uva-ursi) usually blooms in spring, has flowers all around the prairie right now. 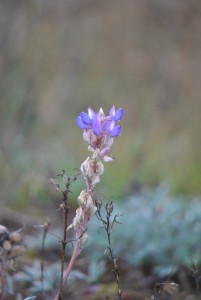 Elegant Lupine (Lupinus lepidus) often blooms all through the summer, but this one is finishing up now. 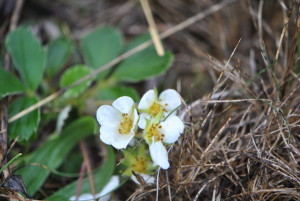 Strawberries (Fragaria virginiana) bloom throughout spring, but they are out all over right now. 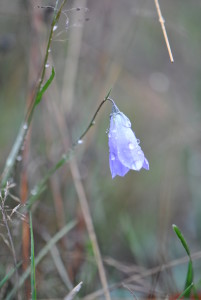 An early summer flower, there are a few Harebells (Campanula rotundifolia) out on one mound. 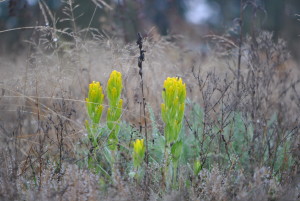 And finally, the endangered Golden Paintbrush (Castilleja levisecta) is flowering here and there around the prairie, despite usually doing so in May and June. 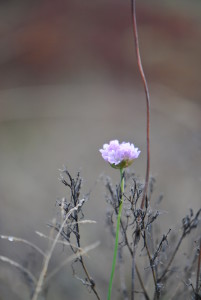 This single Sea Thrift (Armeria maritima) is an early bloomer, usually around March and April.