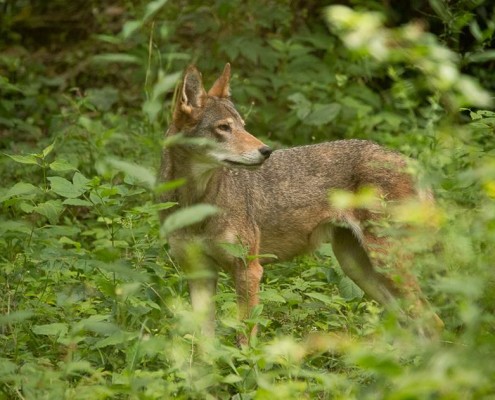 What makes the red wolf so special? For one thing, the red wolf is one of only two wolf species indigenous to North America. Second, the red wolf can be found ONLY in the U.S. – no other country in the world has a native population of red wolves. Third, at its lowest point in the 1970s, the wild red wolf population had dwindled to a mere 14 wolves in the world.

This beautiful representative of our country is smaller than his gray wolf cousin, and typically weigh between 50-80 pounds. Wolf Haven International participates in a special program that is contributing to the recovery of the red wolf. The Red Wolf Species Survival Plan (SSP) program is headquartered at Point Defiance Zoo in Washington State.

What happened to the red wolf?

Red wolves were victims of predator extermination programs and habitat loss. The original red wolf range extended throughout the southeast portion of the United States. As gray wolves were eradicated, coyotes experienced a population explosion and radically expanded their range east. Simultaneously, as the red wolf population fell, coyotes and red wolves began to interbreed. 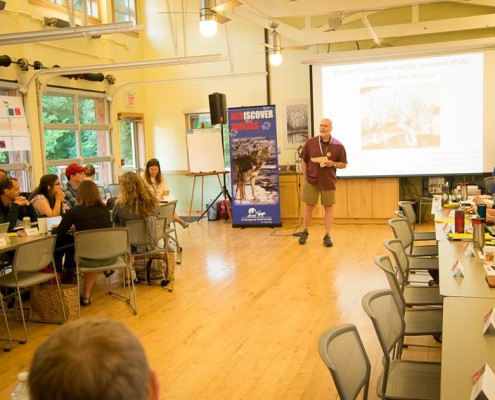 Red wolf SSP Coordinator and studbook keeper, Will Waddell, opens the meeting by welcoming the institutional representatives who traveled to MO. for the meeting. Photo c/o Endangered Wolf Center.

How do you save a red wolf?

A red wolf Species Survival Plan (SSP) was developed to manage and oversee the captive population of this endangered species, in consort with the United States Fish and Wildlife Service.  Although the Service is currently not releasing captive red wolves into the wild, the SSP maintains a genetically diverse captive population as a safety net, should something happen to the wolves in the wild. Today there are approximately 75 free ranging (wild) red wolves  roaming their native habitat in northeastern North Carolina in the Alligator River National Wildlife Refuge, and a captive population of just under 200 red wolves among 45 facilities in the U.S. As is the case with the Mexican wolf SSP program, annual conferences are held during which representatives of participating facilities meet to discuss the status of the red wolf, and make critical transfer and breeding recommendations for the coming year. The 2015 red wolf SSP conference was held July 22-24 at Endangered Wolf Center in Eureka, MO, outside of St. Louis. 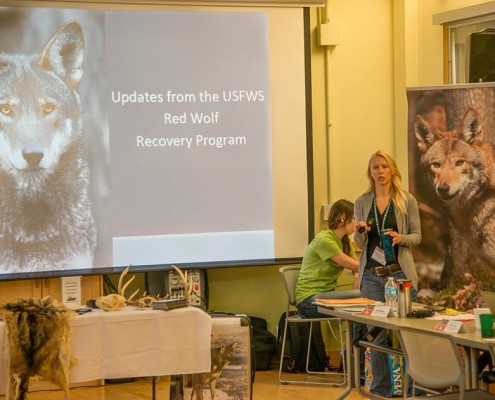 In 2003, Wolf Haven was approved to participate in the Red Wolf SSP program as a captive breeding facility. The red wolves living here are essentially on loan to us from the US Fish and Wildlife Service (USFWS), and we follow very strict rules and guidelines for the care and maintenance of these animals. Interaction with humans is kept to a minimum and most observations are done by remote camera. Specialized enclosures have been built that meet the size, space and privacy requirements of the Red wolf SSP program.

There are currently four red wolves in residence in the sanctuary, though they are not on the visitor route. Jacob, Tamaska and Tala are all available for symbolic adoption, and Nash will be in the near future, once she has settled in at her new home. 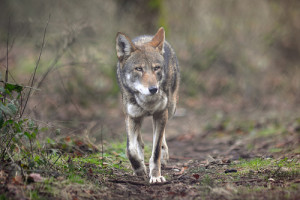 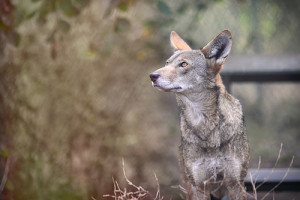 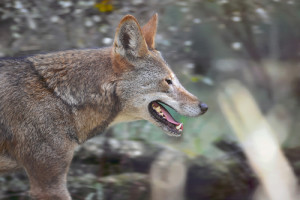