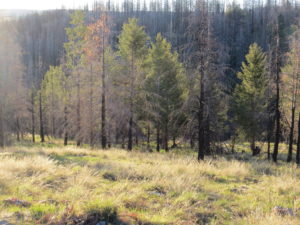 This is the Corduroy Creek area in Arizona, where the wolf pen was located.

Plans are being made for the first release IN FIVE YEARS of Mexican gray wolves into the wild! Nearly exterminated in the wild during by the 1930s, the Mexican wolf remains one of the most endangered mammals in North America. In May, Wolf Haven’s Director of Animal Care, Wendy Spencer assisted in the care & observation of two wolves scheduled for future release. (this is the second blog post about her experience.)

In early April we received word that the Interagency Field Team (IFT) was planning to initiate a release operation later in month. The plan was to move M1051 and pregnant F1126 from Sevilletta to a hard-sided acclimation pen in the Apache National Forest where they were to remain while the female whelped and the family acclimatized enough with the area so that once released, they would hopefully recognize it has home. And because this would be an extended period of time- at least 6 weeks- the IFT needed some help keeping an eye on the wolves and monitoring for signs of whelping activity. Maggie Dwire, who is with the United States Fish and Wildlife Service and serves as the Assistant Recovery Coordinator for the Mexican gray wolf program, put a call out to a few representatives from select facilities who participate in the Mexican wolf captive breeding program and asked for volunteers to come to AZ and “pen sit” the wolves. 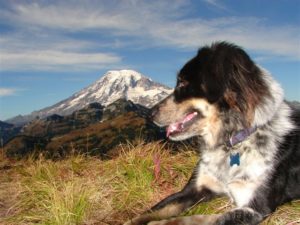 One of the dogs (Tom) that Wendy had to temporarily say good-bye to during her trip.

As reticent as I am about leaving not only the sanctuary animals, but my own personal animals, I knew this was an opportunity of a lifetime and one that I could not pass up. On May 17, I flew to Albuquerque, NM, and the next morning, myself and Erin Kipp, a staff person from the Endangered Wolf Center, made the 4 hour trip to the office in Alpine, AZ, where we met several members of Arizona Game and Fish (AZGF), one of 5 agencies who make up the IFT. On the Arizona side, it is AZGF that see to the day-to- day management of the wolves on the ground. They have a dedicated staff who focus solely on the wolves and as I discovered, even though there are only approximately 38 free ranging wolves in Arizona (at last count), those wolves keep the staff plenty busy. Everything from tracking, to telemetry flights, to trapping and collaring, to managing livestock conflicts (to name but a few) falls under the purview of AZGF, so trying to pen sit wolves for 6 weeks would have significantly stretched their resources……….